You can get a dramatically different and more modern look for your 1997-2003 F150 by investing in an awesome set of fender flares. Designed by the top manufacturers in the business, these fender flares not only give your F150 a more custom look but also allow for extra clearance if you're adding a set of larger, rugged, off-road tires. You F150 will instantly stand out from the pack and look absolutely menacing with our selection of easy-to-install fender flares that match perfectly with the factory lines of your truck. After you're done shopping here, take a look at our F150 hoods to add an even more custom look to your F150.

"Which Fender Flares Are The Best For My F150?"

Aftermarket fender flares are one of the easiest ways to get a much tougher look for your 1997-2003 F150, giving it a much more aggressive attitude. Nearly all of our fender flares can be installed without too many hassles and instantly transform your F150 into a much more tough-looking truck. There are several different designs, brands, and styles of flares out there and each one is a great compliment to any aggressive F150 build. Some of our favorite choices for the 1997-2003 F150 come from Bushwacker and each style can add head-turning looks to your truck. Whether you're just looking for improved looks for your daily-driven F150 or if you need more clearance for larger off-road tires, each of these styles have a lot to offer. Each kit comes in unpainted black ABS plastic that is either ready to be fitted and installed or painted to match your paint job.

Our awesome Bushwacker 1997-2003 F150 Extend-A-Fender Flares give your truck 2" of tire clearance that not only makes your truck look more aggressive and beefy but they also protect the body from any rocks or debris that might get kicked up by your tires. These fender flares come in an Extend-A-Flare Front Set and a separate Extend-A-Flare Rear Set so you can customize your truck to fit your needs. 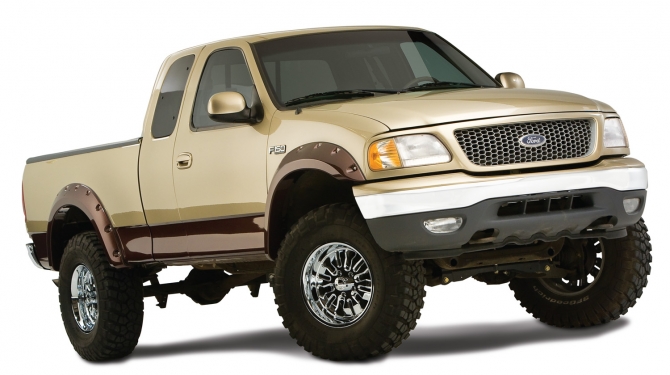 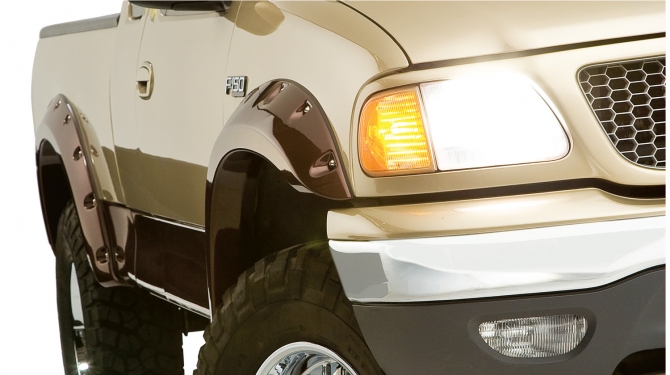 Bushwacker's Cut-Out Fender Flares are some of the most aggressive and fierce-looking body upgrades you can add to your 1997-2003 F150. While they do involve some minor drilling for installation, the result is an instant success if you're trying to toughen up your F150 build and make it stand out from the rest of the pack. These Cut-Out Fender Flares come in a smooth and paintable black ABS plastic that you can either load onto your truck as is or paint them up to match your paint job or whatever color scheme you're going for. Bushwacker offers these kits as Front Cut-Out Fender Flares or Rear Cut-Out Fender Flares so you can customize your truck with the plans you have in store. Either way, these are real head-turners.