The stock ride height of your 2004 to 2008 F150 may be "good" enough for grabbing groceries and helping your buddy move their mattress. It's not good if you want to give your tough truck an aggressive look and the ability to conquer any terrain on the planet. That's where our selection of lift kits and heavy-duty suspension hardware come in. These complete lift systems range from 3" kits to extra-tall 6" lift kits and can come with everything from basic shocks and blocks to powerful coilovers, crossmember lifts, and reservoir shock systems that allow you to push your truck to the absolute brink of its performance. After you're through with our lift kits, take a peek at our F150 exhaust kits, F150 tuners and monitors, or our F150 wheels and tires. Ford F-150 Fitments: 2004, 2005, 2006, 2007, 2008 Ford F150 with 4.6L or 5.4L engines. Submodel Fitments: FX2, FX4, King Ranch, Lariat, STX, XL, XLT. Some Exceptions apply, please see individual product pages for specific fitments. 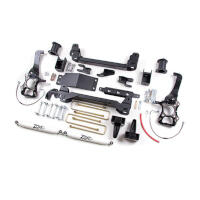 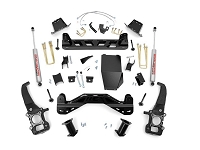 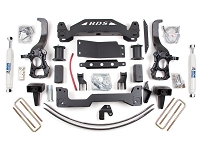 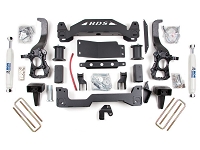 Going Tall on your F150 Build

If there's one thing that keeps the older 2004 to 2008 F150s in the shadow of newer F150s (sometimes literally), it's that their ride height just isn't as impressive as the 2009 to 2014 trucks. That's why it's almost always better to go big or go home when it comes to a lift kit. While a tall 6" lift may be overkill most applications on newer trucks, a 6" lift on a 2004 to 2008 F150 actually looks pretty darn good, especially once you get a set of 35" tires on your rig. Check out the images below of our 2004 F150 Project Truck and its Pro Comp 6" Lift Kit for a good example of just how awesome your truck can look with a big lift.

First up, our Zone 4" lift kit. The kit allows for the fitment of 35x12.50" tires on a set of 20x9" Fuel Hostage wheels with a 01mm offset without any rubbing. The kit uses strut spacers up front and a larger rear block with U-bolts in the rear to generate the lift. The kit also included lifted knuckles, differential drop brackets, dropped crossmembers, a differential skid plate, lifted knuckles, new rear shocks, new braided brake lines, e-brake cable drop bracket, and all the hardware you need to get the kit installed. The kit is extremely straightforward and comes in at a great price point.

Now the Zone 6" Lift Kit. With this kit on our truck, we managed to squeeze on 20x10" Fuel Lethal Wheels with a -24mm offset with Mickey Thompson Deegan 38 35x12.50" tires, and only had a slight rub near on the front valance at close to full lock. The actual difference in hardware between the two kits is almost nonexistent. In fact, the only hardware difference between the two is that the 6" kit comes with taller front strut spacers and a larger rear block to squeeze out the extra lift. That also means that install of both kits is remarkably similar.

So which kit should I get?

That's the burning question, isn't it? Compelling arguments can be made for both. On one hand, a 4" kit will let you fit on 35" tires and generally cost a little less. 6" kits do give you a smidge more ride height, open up a few more wheel and tire size options, and costs just about the same amount to install as a similar 4" kit. Anyway, here's some side-by-side comparisons of the two kits on trucks with the same size tires for your perusal.