When in doubt, throw a blower on it. That sort of logic hasn't let us down, and dropping a powerful supercharger system into your 2005 to 2009 Mustang GT is one of the quickest and most effective ways to make a ton of horsepower and torque. While there are different styles, all superchargers work by forcing extra air into your Mustang's engine using belt-driven rotors and compressors. After you've grabbed a supercharger, take a took at our huge inventory of exhaust upgrades,  or driveshaft upgrades to get the most out of your new Mustang supercharger kit. 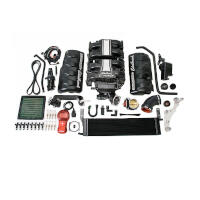