Posted by Jason Locke on 10/18/2019 to Before you Buy
Let's just get right down to it: 35x12.50" tires are overrated and there's an exaggerated need to try to squeeze a 35x12.50" tire on the F150s. It's honestly kind of baffling the amount of Q&As, calls, emails, forum PMs, carrier pigeon microfilm, etc. from F150 owners desperately trying to find some combination of leveling/lift, wheel offset, and black magic to squeeze on a 35x12.50" (though also 33x12.50s, just to a lesser extent) and generally not liking the answers they get. The fact is that it's not easy to squeeze a 35x12.50" tire onto an F150 (unless you jump straight into a 4" lift kit), but you also shouldn't be obsessed with trying as there's plenty of other tire options that give you similar results without the fitment headaches or expense. How to Fit 35x12.50" Tires onto your F150
Before we get into why you should probably go with just about any other tire size than a 35x12.50", there are a few ways to get a 35x12.50" onto your F150, all of which require some effort especially if you're trying to clear upper control arms, remote-mounted reservoirs, knuckles from lifts, or whatever else. The main thing you need to clear a 35x12.50" tire is lift. An F150 at factory ride height is not going to clear a 35x12.50" without seriously chopping up your F150's front end. The quickest way to clear 35x12.50" tire is by jumping up to a 4" lift kit. 4" Lifts provide enough ride height and wheel well clearance to clear a 35" tall tire without issues. However, the whole "12.50" thing is still an issue and you can't clear a 35x12.50" on the factory wheels due to the backspacing required to clear your average lift kit's knuckles. Thus, if you want to clear a 35x12.50" tire, you'd still need a set of aftermarket wheels with less backspacing and offset, which drives your cost up immensely. While a 4" lift is effective, it's still only a half-measure, and a pricey one at that. If you don't want to go through the hassles of a complete suspension lift kit and a set of new wheels, the other option is adding a leveling kit, trimming at least some of the components around the front wheel well, and/or adding a front off-road bumper with more clearance. First off, you're going to need at least a 2.5" leveling kit if you want to do as little trimming as possible. If you're keeping the stock wheels and you're not using a wheel spacer, then you'll need to trim the crash bars on 2015-2019 F150s and you'll have to say goodbye to adding a UCA, coilover kit, or a full lift kit with knuckles. Whether you're keeping your stock wheels or not, you'll end up having to trim your F150's wheel well liner and front valance. If you're using wheels with an extremely low offset and backspacing, you'll also likely need to trim the rear part of the front wheel well near the mounting bolts for the liner. It's not a pretty picture, but it can be done with some modicum of success. Nearly as Good and More Hassle-Free Tire Sizes
As we've demonstrated, squeezing 35x12.50" tires onto the F150s is either a pain in the ass and/or gets expensive in a hurry. So what's the alternative? Well, there's plenty of other tire size options out there that cause less of a headache while still giving your F150 a great look and some extra ground clearance. Sure, you may not get quite the ground clearance, wheel well fill, or ground spread as a true 35x12.50", but how much difference does that extra half to inch and a half worth of tire actually make out in the real world? Here's a little quiz for you: which of the trucks in the images on this page are running a 35x12.50"? If you said zero, you'd be correct. Even our 2015 F150 Desert Runner build with its 4" BDS Coilover Lift didn't run a true 35x12.50". We used a LT305/70R18 Mickey Thompson Baja ATZ so that we could keep the Method wheels which didn't have the offset and backspacing to clear the lift kit with a 35x12.50". Did that 1/5" of an inch in height or half and inch in width make a difference in how that truck performed? Absolutely not. 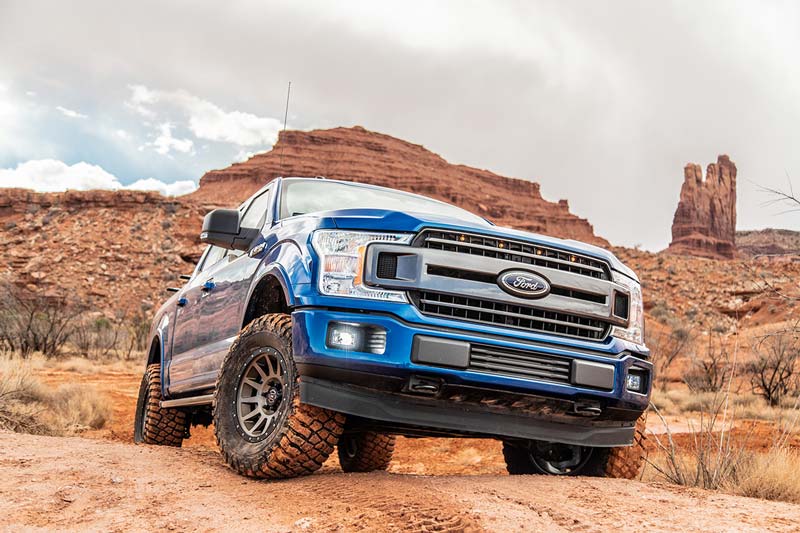 While more than a few of our F150 project trucks have run 35x12.50" tires in the past, the majority have not, and all of those that did were on full suspension lift kits. The only truck that was on a leveling system that ended up with 35x12.50" tires was our 2014 Tremor Overland Truck, and it needed valance and wheel well trimming to pull it off. One of our more favorite tire sizes for the F150s as of late is a LT305/65R18, which equates to roughly a 33.6"x12" tire, and is a lot easier on clearance while still providing a very similar look and "close enough" ground clearance to 35x12.50". Check out the images below for a look at the Tremor with its 35x12.50R17s with our 2015 XLT 3.5L EcoBoost and its LT305/65R18s. There is not much of a difference in either looks or capability. 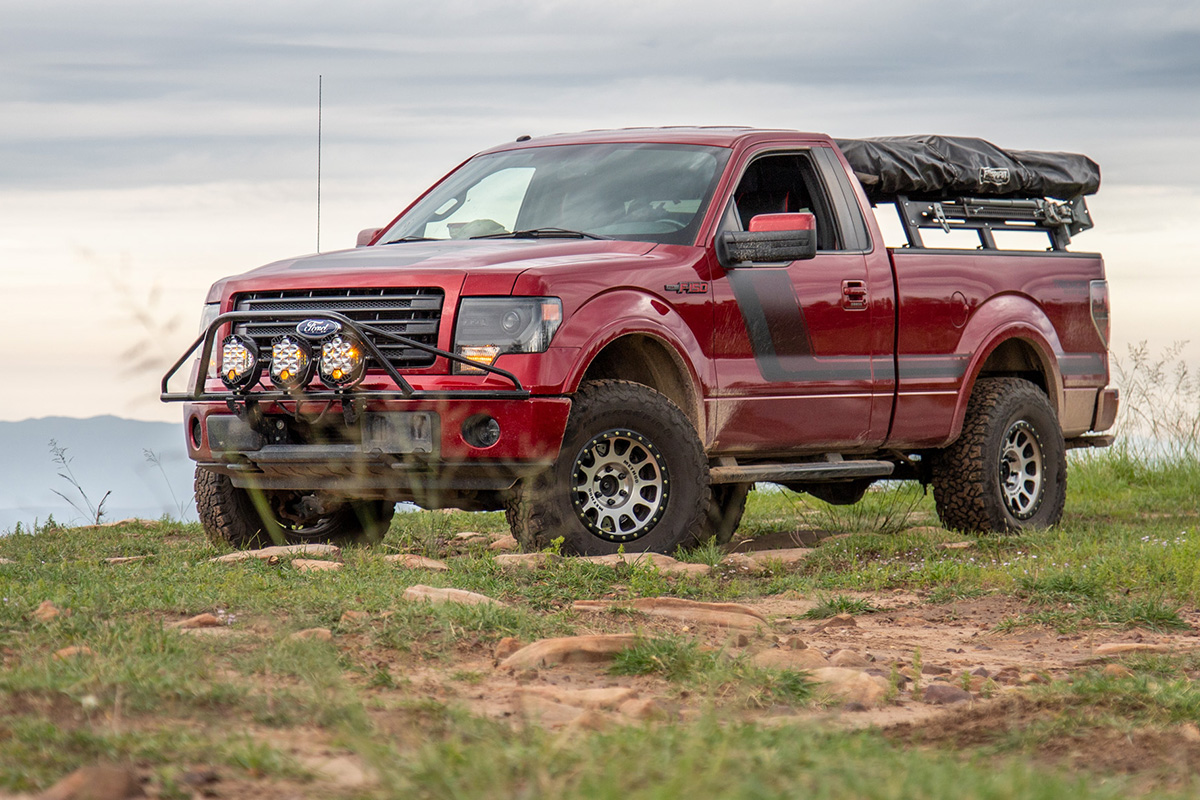 Basically, if you want to try to fit on a 35x12.50", go for it. They look great, and they'll get you nice ground clearance. But, their look is overrated, clearances a pain to deal with, and end result not that much different from slightly smaller tire options. In any case, take a look at our 2004-2014 F150 Wheels and Tires or our 2015-2019 F150 Wheels and Tires to find yourself a set, whether they're 35x12.50s or not.
SHARE THIS POST
Previous Post
Next Post
Ooop! The email you entered isn't valid.
WooHoo! You subscribed successfully.
Ok! You're unsubscribed.
Scroll to TOP
Mini Cart 0 Items