Posted by Jason Locke on 5/30/2020 to In-Depth Review
With over 225,000 miles on the clock, our 2011 F150 5.0L XL (owned by Yours Truly) needed to get some pep back in its step. Despite getting a fairly fresh motor (that's a story for another day), this F150 was still showing its years in its driveline and needed an overhaul, especially if we wanted to keep turning its LT305/65R18 Falken Wildpeak A/T3Ws turning effectively. To that end, we grabbed a complete Nitro 4.11 Gear Package that includes front and rear 4.11 gears as well as a pair of Master Install Kits for both differentials that allowed us to give our truck's drivetrain an almost total rebuild with the extra performance of 4.11 gears over the stock 3.55s. Since the rear differential needed to come out for the gear install, we decided to throw in an Eaton TrueTrac LSD to replace the OEM clutch-type LSD, which was basically only LSD-ish at its mileage. We did the install and then performed the break-in gear oil change a while ago, and unfortunately due to COVID-19, we weren't able to get the truck out to stretch its legs. That changed Memorial Day Weekend, when I got the truck out for a nice road trip up to Northern Arizona with some very light trail riding thrown in. The results were good, though now we need to find an excuse to really push the TrueTrac to its limits.

Street driving with the Nitro 4.11s has been an absolute dream over the stock 3.55s, though their ding in cruising fuel economy was acutely felt on our way up to the area just south of Munds Park, Arizona, which involves an altitude change of over 6,000ft. During street driving around town, the 4.11s actually gave us boost in fuel economy, likely due to the fact that the truck can get up to speed faster and into overdrive faster than with the longer 3.55s. However, out on the highway cruising at 80mph, the increased RPM and fuel burn at cruising was definitely felt. Nearly the same drive last year had us getting about 15.7mpg (hand calculated), while this year with the 4.11s, we averaged around 15.2mpg (also hand calculated) and we had less camping gear this time around. While not a huge difference, it is something to keep in mind if you're trying to maximize your fuel economy. That all being said, the 4.11s did make the drive much more pleasant. Climbing those 6% grades up the I-17 and having the truck only need to downshift to fifth or fourth gear instead of all the way down to third was a nice change of pace. 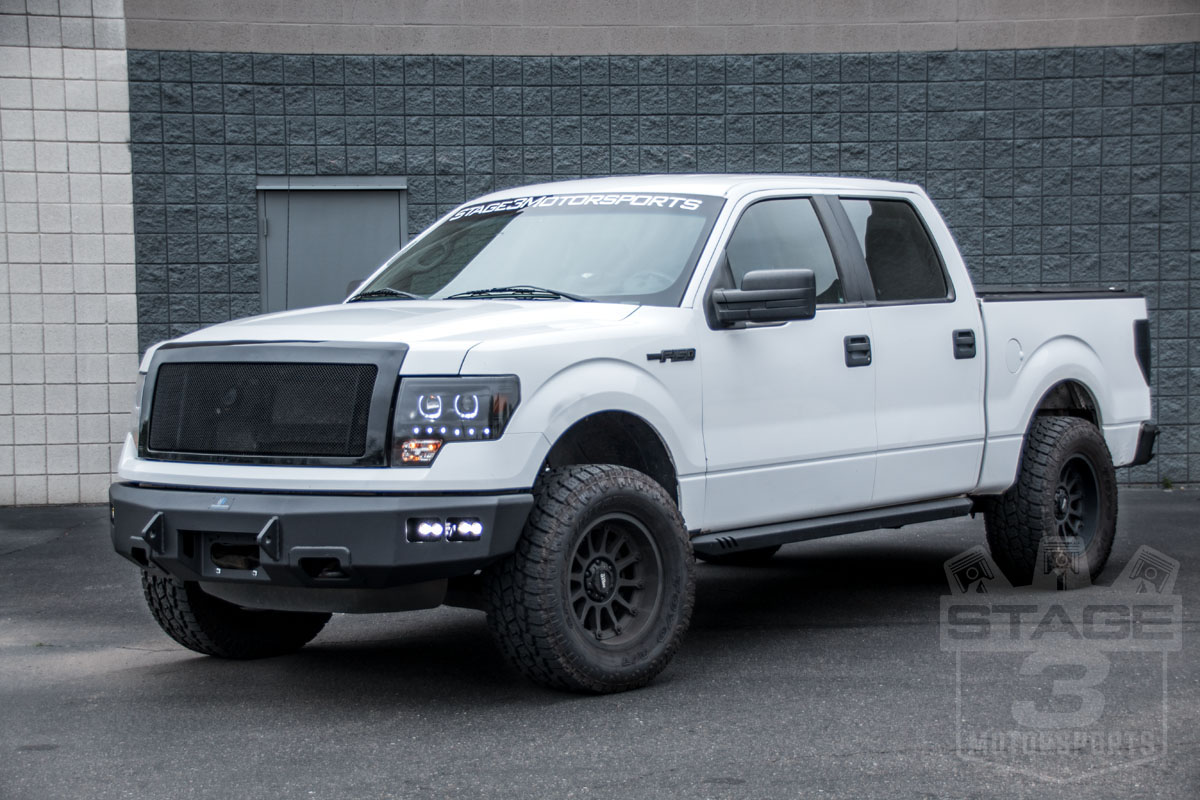 In the Dirt with Nitro 4.11s and Eaton TrueTrac LSD

While we didn't go too crazy off-road on this trip, we did manage to get the truck dirty, including a little jaunt down Schnebly Hill Road to its scenic overlook. One of the issues with the original 3.55s and the big LT305/65R18s on our truck is that it often takes a good amount of throttle input get the tires moving, but if you give it too much, you have a good chance of losing what little traction you may have. With the 4.11s, it takes relatively little throttle input to generate the torque needed to get the tire rolling and it's easier to modulate the throttle to maintain both traction and speed off-road. This came in real handy, since we rolled into the camping area after dark, and I was trying to follow two other trucks towing trailers and kicking up a lot of dust. I had to stay on both the throttle and the brakes to keep from running into anybody through a lot of dust. The KC HiLites Flex Dual Spread Beams and Flex Dual Spot Beams in my truck's Hammerhead Low-Profile Front Bumper came in super handy since we could barely see the sides of the road through the dust with just the headlights. The Nitro 4.11s and the Eaton TrueTrac (though the TrueTrac still has a lot more potential that we haven't unlocked yet) really shined on the way down and back to Schnebly Hill Overlook. We even had a basis for comparison, since a bone-stock 2018 F150 EcoBoost (owned by my wife's uncle) came with. Much like our night jaunt to the campground, the 4.11s let us keep our throttle inputs low and linear, but unlike the fairly easy road to the campground, the road down to the overlook was actually fairly rocking and rough. The Nitro 4.11s made it extremely easy to get up and over all the rocky areas and dips in the road, while also maintaining distance with the 2018 truck that came on the adventure. As for the TrueTrac, it made the journey a breeze, though I know we barely even scraped the surface of its potential. I was able to keep the truck in RWD both to and from the overlook and never once felt a loss in traction, even when I did get to areas where I could speed up. With the old stock LSD, I likely would've had to pop the truck into 4WD to get back up the hill to the campsite. The TrueTrac kept the rear wheels spinning, allowing the Falken A/T3Ws to get grip and propel the truck uphill. The combo of the 4.11s, 2.0 coilovers and shocks, and Eaton TrueTrac was absolutely awesome, especially in comparison to the 2018 F150's stock shocks, factory Wranglers, and open diff. The folks in that 2018 F150 had a pretty rough time, while our old 2011 XL Workhorse was smooth and composed over the rough stuff. Unsurprisingly, the combination of 4.11 Nitro Gears and an Eaton TrueTrac is pretty awesome. The return to powerband and the extra mechanical advantage provided by the shorter gearing over the stock 3.55s, and the vastly improved rear end traction provided by the LSD is a one-two punch that makes both on and off-road driving much more pleasant. Granted, the ding in cruising fuel economy from the shorter gears may turn some folks off, but in exchange you get a more responsive truck that downshifts less and not as far down the transmission. Like any truck mod, there's a bit of give and take, but if you're hitting the dirt on a regular basis, then Nitro's 4.11 Gear Package and Eaton's TrueTrac are a winning combination. What's even better than mods is being able to relax in the woods with a hefty supply of beer, which the 4.11s and TrueTrac helped make happen. Drivetrain Upgrades: Tires: Bumper & Lighting:
SHARE THIS POST
Previous Post
Next Post
Ooop! The email you entered isn't valid.
WooHoo! You subscribed successfully.
Ok! You're unsubscribed.
Scroll to TOP
Mini Cart 0 Items