The rotors and pads that were on our 2012 F150 5.0L FX4 Project Truck when we initially picked it up really weren't in that great of shape to begin with. After a few thousand miles of use and abuse both on the road and off of it, out rotors and pads were pretty well shot. Not to mention we needed a little something more heavy duty than stock in order to handle our upcoming ProCharger system. In any case, it was definitely time for some new braking hardware on our truck, so we turned where we almost always turn: our friends over at Power Stop Brakes. Power Stop's complete front and rear brake kit for 2012 F150s is a great choice for anyone whose stock brakes are on the outs and who needs some better stopping performance. Power Stop's kit comes standard with drilled and slotted rotors and ceramic pads for all four corners that provide better bite, improved stopping power, and reduced fade over the factory rotors and are honestly a great upgrade for just about any truck. 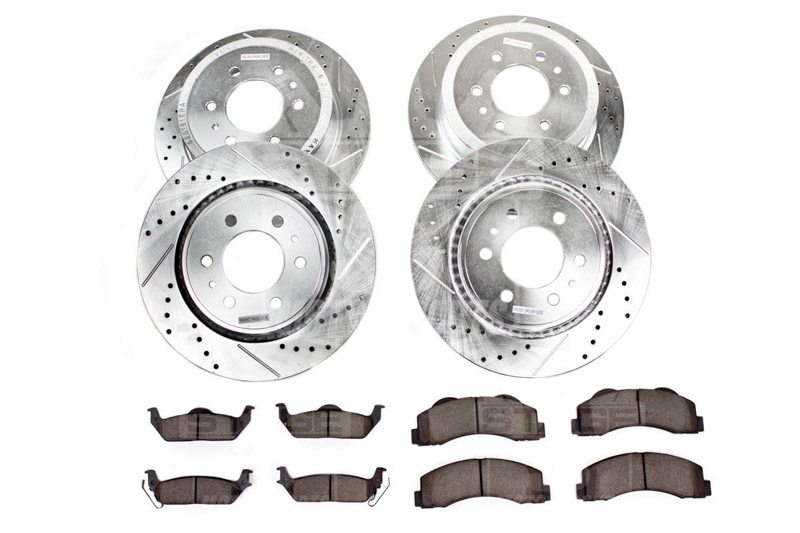 Installation of this kit isn't much different from most brake rotor and pad replacements, so if you've done this before, much of it will be familiar. This install guide is also applicable to Power Stop's 2009 F150 Brake Kit, 2010 to 2011 F150 Brake Kit, and their 2013 F150 Front Brake Kit. The only difference between all these kits is the backspacing of the rear rotors. Why? Because Ford. Anyway, your 2009 to 2013 F150's braking system will look more or less the same as ours, regardless of drivetrain or year. Anyway, installation wasn't overly difficult, but it is pretty physical, especially if the rotors you're yanking off your truck are in as bad of shape as ours.

Of course the first step of any install here at Stage 3 Motorsports is to head down to Extreme Performance out in Goodyear, Arizona, to elicit Kris, Marty, and whomever else is around to give us hand with the grunt work while we take pictures and video. Kris was our main help on this little brake adventure, and he got our old rotors and pads off and new Power Stop rotors and pads on very quick and very clean.

With the truck still on the ground, the first real step of the process was to loosen the lug nuts on all four wheels. With that complete, Kris got the lift arms into place and our truck up in the air.

Kris started on the front brakes first, and began getting our stock hardware off our truck by removing the bolts holding the caliper assembly to the spindle after hitting them with some penetrating oil to make Kris's life a little easier.

Kris removed the caliper from spindle and set it on top of the steering knuckle. While he'd usually hang it from the spring, there wasn't enough slack in the brake line without messing with its clips or brackets. It seemed to rest just fine on the knuckle. To actually get the rotor off, Kris needed to grab a hammer and beat on the hub to loosen the corrosion. He made sure to hold onto the caliper to prevent it from falling.

After a decent amount of hammering, Kris was able to slide the rotor off the wheel hub without an issue.

The Power Stop rotor drops right into place of the factory rotor on the hub. Just make sure that you're putting the correct rotor on each side of your truck. The rotors are labeled "Pass Side" and "Driver Side", but those stickers can come off on occasion. You can tell by the orientation of the slots and cross-drilling which side needs to go where, however.

After the rotor was in place, Kris removed the pads and the caliper's pad carrier bracket before compressing the front pistons using one of the old brake pads and a big locking wrench.

Kris made sure the pads were clipped firmly into place before reinstalling the caliper assembly back onto the spindle and over the rotor.

Changing out the rotors and pads on the rear of the truck isn't much different than the fronts. Step one was to remove the bolts holding the caliper to the spindle.

With the bolts out, Kris depressed the caliper retaining clip and carefully used a breaker bar to pry the caliper off the rotor. Once the caliper was removed, Kris set it on the axle and made sure not to stretch or kink the brake lines.

Just like the front, the rear rotors were a little stubborn coming off the hub. Again, Kris held the caliper and started hammering.

After a good beating, the rotor came right off.

Given that the rear caliper didn't have a ton of wiggle room for its brake line, Kris tackled the pads before putting the rotor on. The outer pad a butterfly clip holding it in place, while the inner pad actually has a claw clip that fits inside the piston. Kris depressed the clips and slid the stock pads out.

Kris compressed the piston using his wrench before installing the new pads. Unlike some vehicles, the F150s don't have a screw-style piston for their rear brakes, so you can use a wrench or standard C-clamp.

Kris then dropped in Power Stop's pads and made sure their clips were fit on nice and tight.

With the pads taken care of, Kris put the new rotor on the hub and then dropped the caliper assembly right back into place.

Kris did the same thing for the driver's side brakes, and our Power Stop Brake Kit install was nearly over. All that was left was to get the wheels and tires back on.

So is the rotor not held on by a spindle nut or anything, it should just hammer off? 2011 F-150 Lariat Supercrew 4x4

I have a 2012 f-150. Just put on new rotors and they rub on the backing plate do you know why that is happening