There has yet to be a project truck here at Stage 3 Motorsports that hasn't been graced by the goodies our friends over at Recon Lighting manufacture with gusto. While our 2012 F150 EcoBoost FX4 received headlights from elsewhere, and our plans for the taillights and third brake light are currently up in the air, we did grab us one of Recon's 60" Xtreme LED Tailgate Light Bars. Now, we've put Recon's standard 60" bar on several of our trucks, but this Xtreme bar is a whole different animal. Each Recon Xtreme tailgate bar features red running lights and white reverse lights, but also comes with scanning amber turn signal LEDs that look totally awesome when you throw on your truck's blinker. While all that sounded pretty awesome on paper, we wanted to get one of these bad boys on a truck to see it in action for ourselves. 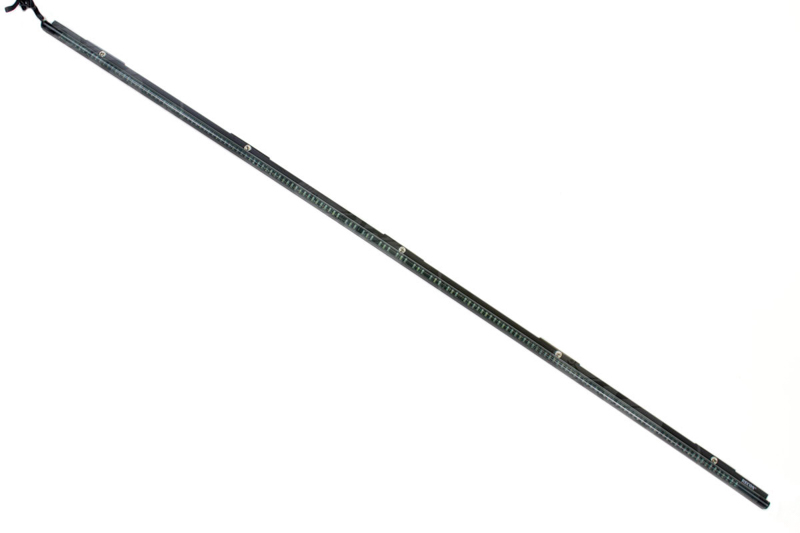 Since we needed to juggle camera equipment for this little adventure, we grabbed our Recon Xtreme bar and headed down to our friends over at Dyno-Comp for the actual installation. Well, we were actually down their for a Zone Lift Kit Install and managed to find some time while the wheels and tires were being balanced, but hey. In any case, Matt was going to help us out and get our Xtreme Bar up and running.

The first step to the bar install was arguably the easiest. Matt pulled the backing off the 3M tape, lined the bar up so it was centered in the jamb of our tailgate, and put it on the truck.

With the light bar centered and mounted, it was time for the wiring. The light bar comes with two sets of wiring. One set is just a pair of leads (the red and white wires). The white wire needs to hook into the taillight's reverse bulb wiring, while the red wire needs a 12V power source. The second set has a black, inline relay and a plug-and-play three-prong connector for hooking into the trailer wiring connector.

It sounds a lot more complicated than it is. The only real difficult thing is running all the wiring and making it look clean, since Recon provides you with a whole ton of it. Matt's first job was to route all of the wiring. He started by dropping the relay harness between the bumper and frame.

Matt cleaned off a part of the receiver hitch and then attached the relay to it using double sided tape. He then zip-tied the wiring together.

Matt then moved on to the driver's side taillight. He removed its mounting bolts before pulling it out from the truck.

Not being all the familiar with Ford's taillight wiring (and the fact we lost Recon's instructions in our mess of lift kit components and cold air intake parts), Matt busted out his voltmeter to find power going into the turn signal bulb before cutting the wiring.

On our 2012 F150 EcoBoost, it was the baby blue wire, which Matt then cut and spliced using a shrink splice. Recon includes quick-splice connectors with their kit.

Matt then went ahead and plugged the connector into the trailer three-prong connector.

Matt chose to wire the 12V source power into the license plate lights. While he could've wired them into the parking lights in the tail lamp, the advantage of the license plate lights is that reaching them required less wiring, allowing for cleaner routing and the ability to discard a lot of Recon's included wiring. He figured out power with is voltmeter, and then spliced in using another shrink connector.

Once everything was spliced in, Matt popped the license plate light back into place.

All Matt had to was finish cleaning up the wiring with a few zip-ties, and our Recon Xtreme LED Tailgate Bar Install was complete.

I installed the Recon 60" "Xtreme" Amber Scanning Tailgate Light Bar on my 2004 Dodge Ram and it was working great, the other day everything stopped working, I checked all the wiring and noticed The second set has a black, inline relay and a plug-and-play three-prong connector for hooking into the trailer wiring connector comes with a fuse, well the fuse was blown I put a new one in but as soon as I put on in it blows, what you think is wrong

i have the Recon xtreme I need to no ware the wires go for the 7 pin I have a 2002 Ford Expedition XLT I lost the instruction ? Thank you

Is a relay needed to wire the light bar in at the trailer light harness?