While none of the interior upgrades on this F150 are very complex or jaw dropping, they are extremely useful and definitely worth having around. To protect our carpets and our back seat, we threw down some WeatherTech DigitalFit Floor Mats and a WeatherTech Rear Seat Protector. To give the sound system some new life, we wired in a Kicker VSS Subwoofer system. You can purchase these exact mods in the product section at the bottom of this page.

The first of our interior upgrades was a full set of front and rear F150 SuperCrew WeatherTech DigitalFit Floor Mats. Let's face it, we here at Stage 3 can't help but get dirty and despite our best efforts, usually enter our trucks' cabs with muddy feet. WeatherTech's floor mats trap mud, moisture and other grime and hug all of the contours of our F150's interior so that the interior carpets stay clean. We chose the grey version of WeatherTech's Mats, which contrasted really nicely with our dark floor carpet and came pretty close to matching our factory grey seat colors. 2015-2017 F150 SuperCrew WeatherTech DigitalFit Floor Mats

Our 2015 F150 Lariat project is equipped with some clean, light grey, leather seats that look fantastic, but also tend to show scuffs and marks. To keep the back seat from getting destroyed by passengers, animals or cargo, we covered it with WeatherTech's Rear Seat Protector. This seat protector installs easily with the help of durable straps, specialty inserts and a non-slip bottom. 2009-2017 F150 WeatherTech Rear Seat Protector (Crew Cab)

Just like anybody else, we here at Stage 3 love to listen to music when we're road tripping or just cruising to work. That being said, our F150's sound system was in need of a little help so we got busy wiring in a Kicker VSS PowerStage Powered Subwoofer and Amp Kit. The 8" subwoofer is powered by an included 200-watt Kicker amplifier that's installed within the enclosure assembly that bolts in behind your F150's rear bench. Needless to say, we are thoroughly enjoying the increased bass in this truck! 2015-2017 F150 Kicker VSS PowerStage Powered Subwoofer & Amp Kit 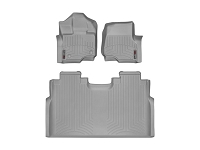