The factory intercooler on the 2011 to 2014 F150 EcoBoost F150s actually does a pretty decent job of keeping all that high-pressure, turbocharged charge air pretty cool, at least to a certain point. The small size of the intercooler itself coupled with a fairly standard core design causes it to get heat soaked fairly quickly, leading to a loss in overall performance for your 3.5L EcoBoost V6. An aftermarket F150 EcoBoost intercooler solves basically any heat soak problem and opens up the way for big power down the road with custom tuning and turbocharger upgrades. One of the better aftermarket intercoolers out there today is the Wagner EVO Performance Intercooler. The Wagner unit is one of the larger and more impressive intercooler options available for the 2011 to 2012 EcoBoosts and 2013 to 2014 EcoBoost F150s, and features a very large surface area with a noticeable "crook" tat allows it to still fit behind your truck's grille. The intercooler features a dual-pass core design with a large volume and is capable of solving the infamous EcoBoost F150's condensation issues with no other modifications. Needless to say, we were pretty excited to get this intercooler up and running on our 2011 F150 EcoBoost Project Truck. 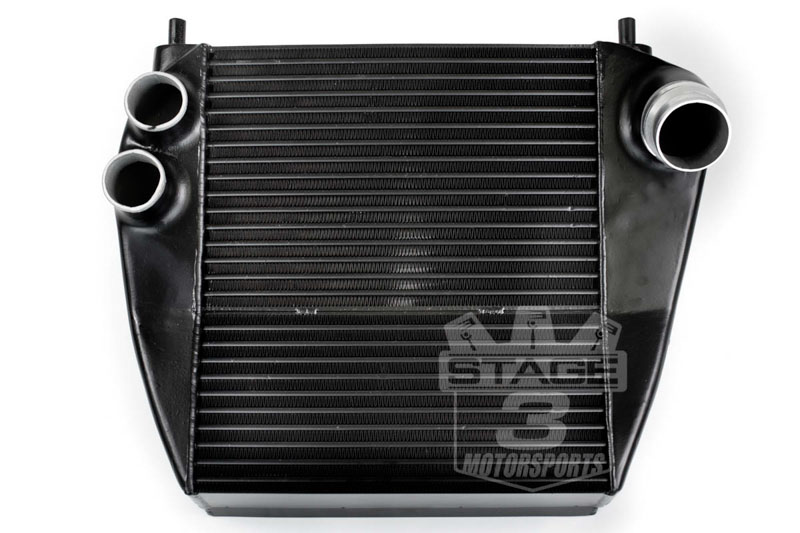 The first thing you immediately notice about the Wagner intercooler is that it's huge. It's a big, heavy, and impressive intercooler that easily dwarfs the factory variant. While it is very big, it bolts on right in place of the stock intercooler fairly easily and is definitely something that can be done in the garage or driveway. Just like any install here at Stage 3, we took our Wagner intercooler and truck down to Extreme Performance in Goodyear, Arizona, to enlist Kris's help in getting our intercooler up and running.

Naturally, in order to get a new intercooler in, you have to get the old one out. So, Kris started off our install by getting the factory intercooler out of our truck.

Kris started removing the stock intercooler by removing the bolts for the upper mounting bracket and then removing it from the truck.

Next, Kris went underneath the truck to remove the intercooler's splash guard, which was simply clipped on to the truck.

Once the splash guard was removed, Kris removed the bolts for the lower intercooler mount.

Once the bolts were out, Kris popped the bracket off the intercooler's isolator mounts and removed it from the truck.

With the bracket out of the way, Kris was able to reach up and loosen the clamp holding on our aFe charge pipe. We did have some oil sitting around from blow-by, and we'll probably need to upgrade to a dual catch can set up in order to avoid filling our Wagner intercooler with gunk.

After the charge pipe was disconnected, Kris loosened the clamps and disconnected the two turbocharger pipes from the other side of the intercooler.

To actually maneuver the intercooler out of the truck (and the Wagner intercooler into our EcoBoost), Kris had to remove the lower bumper splash guard.

Before installing the Wagner intercooler into the truck, Kris grabbed the rubber isolator mounts off the factory intercooler and put them on the Wagner's provisions.

Kris then grabbed the OEM lower mounting bracket and popped it onto the Wagner's lower isolator mounts and lifted the whole assembly into the truck.

While Marty held the assembly in place, Kris bolted the lower mounting bracket back onto our truck.

Once the bracket was secured, Kris connected the turbocharger pipes and our aFe Charge Pipe to the Wagner intercooler and tightened down their clamps.

Kris then went back up top to reinstall and bolt down the upper intercooler mounting bracket.

With everything back in place, our intercooler install was complete. The Wagner intercooler looks pretty awesome and has given our truck a noticeable drop in IATs, especially over long periods of heavy use. We're nothing but pleased with it thus far.