Custom tuning can take your 2011-2014 F150 EcoBoost's horsepower and torque to the next level, all while compensating for extremely powerful modifications that can really turn up your F150's output. Our F150 EcoBoost Custom Tuning from 5-Star Tuning provides a tremendous bump in power output over stock, all while fine-tuning your transmission. Our 5-Star custom tuning can even come backed by optional Powertrain Warranties for 5-Star's EcoBoost Custom tuning. After you're through with tuning, have a look at our F150 EcoBoost Intercooler Upgrades or F150 EcoBoost Spark Plugs. Ford F-150 Fitments: 2011, 2012, 2013, 2014 Ford F150 with 3.5L Ecoboost engines. Submodel Fitments: FX2, FX4, King Ranch, Lariat, Limited, Platinum, STX, XL, XLT. Some Exceptions apply, please see individual product pages for specific fitments. 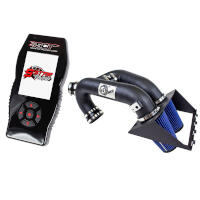 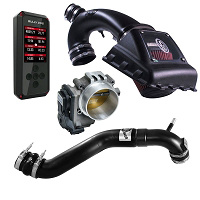 Do I actually need EcoBoost custom tuning?
Only if you grab certain parts like downpipes or any other pretty crazy performance parts or custom engine builds. Honestly, your basic selection of bolt-on performance parts are compatible with the "canned" pre-built tunes that come standard on Edge's CTS or and of SCT's tuner without any problems. Both Edge and SCT have put a ton of work into their tunes and tuners,and even their general tunes can get your EcoBoost F150 excellent performance. However, custom tuning is generally a better option, especially with all the perks that we here at Stage 3 offer. Check out our dyno graph below of our 2012 F150 EcoBoost FX4 running a 5-Star 91-octane Performance/Tow tune.

We've been having a problem or twenty with our F150 EcoBoost custom tuning as of late. While there's not an issue with anything critical to your truck, there is a problem related to a Technical Service Bulletin that Ford sent out a while ago that's giving us a few issues in regards to our custom tuning, namely getting the correct PCM code for your truck.

Back on February 15th, 2012, Ford issued TSB# 12-2-10 which addressed some stuttering, stalling, and power loss issues in the 2011 to 2013 F150 EcoBoost trucks. The issue was software related and Ford sent out new PCM software for dealers and service centers to re-flash trucks suffering from these problems. While Ford's tuning solved the engine issues, it had an unintended side effect of changing your truck's PCM code something other than what the computer's sticker says. This PCM code is critical for our custom tuning.

What's been happening and causing all our issues is that customers who ordered custom tuning on an SCT X-Calibrator 3 or Livewire TS for their EcoBoost alone or as part of our Phase 2, Phase 3, or Phase 4 packages will give us the PCM code that's on the label of their truck's engine computer. However, if their truck was flashed by their dealer because of TSB 12-2-10, then they're PCM will actually have a different unlock code in its new software than what's on the casing. The end result is that we here at Stage 3 get the wrong code and the tune we and 5-Star Tuning provide for your truck won't work at all.

So, we need to change things up a bit, which means we're going to have to take a little bit of a detour to getting you your tune, but at least it will be correct and save you some grief over getting a tune for a PCM code that doesn't actually exist. When you order a custom tune from Stage 3 for your EcoBoost truck, we'll send you out a blank tuner without any custom tunes at all. After you receive your SCT X-Cal 3 or Livewire tuner, you'll hook it up to your truck and use it to pull your truck's "strategy code," which is the PCM code as it appears in the software. Once you have your strategy code, write it down and send an email over to [email protected]. We'll then use your truck's correct code to build a custom tune for your F150 EcoBoost performance parts that actually works.

Getting your PCM strategy code sounds difficult, but SCT's devices make it extremely easy, check below to find out how to get your truck's Strategy Code:

We're really sorry for the inconvenience, but this is the only way we can reliably send out the right custom tunes.

Our new EcoBoost Custom Tune Policy only effects EcoBoost trucks and is only required for custom tuning. Because we're not sure which trucks received the dealership flash, this new policy will be used on all 2011-2013 EcoBoost F150s that need custom tuning. "Canned" pre-built tunes don't require any extra steps. If you need any help at all, give us a call at 1-877-578-2433.

The following parts cannot be custom tuned at this time: