Banks is one of the biggest names in the diesel truck performance world, and while they've dabbled in a few gas-powered trucks here and there – most notably with their exhaust kits – but they've finally put in a bigger effort with the F150 EcoBoosts with this awesome Ram-Air® intake system. This drop-in cold air intake fits all 2011 to 2014 F150 EcoBoost trucks thanks to its MAF and MAP sensor adapters and comes standard with a full air box assembly with a front air duct, deep-pleated Banks Lifetime Air Filter, a one-piece inlet tube assembly, PCV adapter, and high-quality silicone couplers and clamps. The kit is 100% complete out of the box and pretty impressive to look at, especially when its installed. While not as radical as the aFe Stage 2 kits that we've previously installed, the Banks kit looked pretty snazzy and we were pretty pleased with the end result on our 2012 F150 EcoBoost FX4 Project Truck. 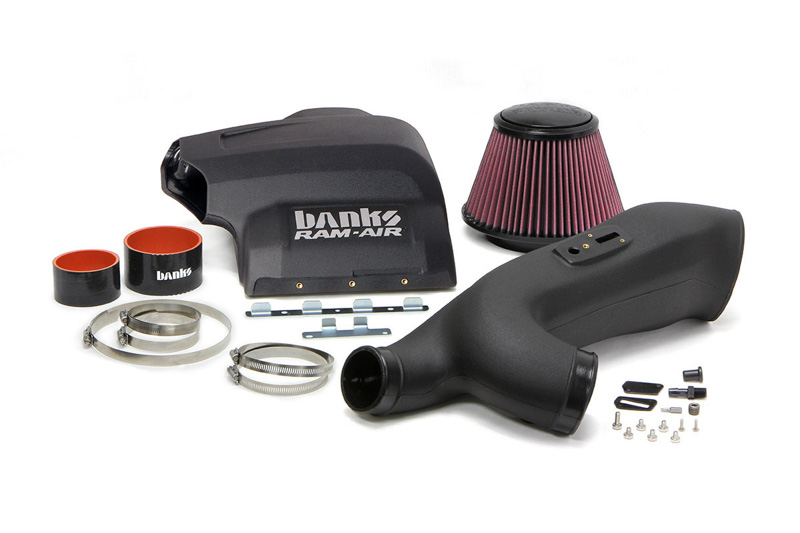 We threw our Banks intake in the truck along with our 6" Zone Lift kit and our Recon Xtreme 60" Tailgate bar and headed down to our friends over at Dyno-Comp for some help with installing everything while we juggled our cameras. We managed to squeeze in some time for the intake install while our truck's new wheels and tires were out being balanced, and Clay took a few minutes to throw our Banks intake onto our engine.

The first step of the install was to get our current aFe Stage 2 Pro 5R Cold Air Intake off the truck. While fairly similar to removing the stock intake, there are a few minor differences. For removing the stock intake, check out our aFe Stage 2 install guide from our 2011 F150 EcoBoost Project truck. Anyway, back on topic. Clay started to remove the Stage 2 by loosening the band clamps holding its inlet tubes to the turbocharger pipes.

Next, he released the stock spring clamps holding the aFe's heat shield mount to the bottom half of the air box before disconnecting the MAP sensor harness.

With everything disconnected and unhooked, Clay lifted the aFe intake out of the truck as one assembly.

Once the aFe was out, Clay started working on the Banks intake. He started by screwing the hooked mounting brackets into place on the Banks air box.

Clay then installed the adapter for the vacuum line into our intake.

Since Banks' intake has provisions for both the MAF sensor of 2011 EcoBoosts and a MAP sensor for the 2012 to 2014 F150 EcoBoosts, Clay needed to install the included block-off plate for the MAF sensor for proper fitment onto our truck. He began by setting Banks gasket in place before screwing on the plate itself.

With the MAF sensor blocked off, Clay transferred over our truck's MAP sensor to the Banks inlet tube from the aFe.

Clay then fit the inlet assembly through the air box before dropping in the filter and clamping it down with one of Banks' included band clamps.

Clay then installed Banks' couplers onto our truck's stock turbocharger pipes and threw on band clamps to hold them in place.

Once the band clamps were in place and secure, Clay dropped in the preassembled intake, fit the inlet tubes into the band clamps, and dropped the filter and air box onto the lower half of the stock air box assembly.

Once everything was more or less in place, Clay reconnected the MAP sensor wiring. Getting the catches on the air box's brackets to lock onto the OEM air box was a little fiddly, and it took Clay a minute to get everything to mate together properly before fully tightening down the brackets with a screwdriver.

Clay then fit on the stock vacuum tubing, and our Banks install was complete.