Our selection of 2011 to 2014 F150 5.0L Cat-Back Exhaust Kits certainly do loud and aggressive extremely well. In general, so do our good friends over at Flowmaster, but they can also do something bit more mild for the more refined F150 build. Meet the 2011 to 2014 F150 5.0L Force II Cat-Back Exhaust kit. This system gives your truck improved exhaust outflow and a more aggressive sound under hard acceleration, but is extremely well-mannered at idle or cruising and has a much quieter overall volume than Flowmaster's American Thunder cat-back system. While certainly less ferocious than many of our other cat-backs that we've so far tested, the Force II kit does have noticeable rumble when you hit the throttle. Being one of the more popular kits for these trucks, we grabbed one of our very own for install on our 2012 F150 5.0L FX4 Project Truck. One of the better features of this kit is that it comes with tubing that allows you to choose either a straight dual rear exit or dual side exit configuration, which makes it perfect for anyone who's on the fence about their truck's looks. 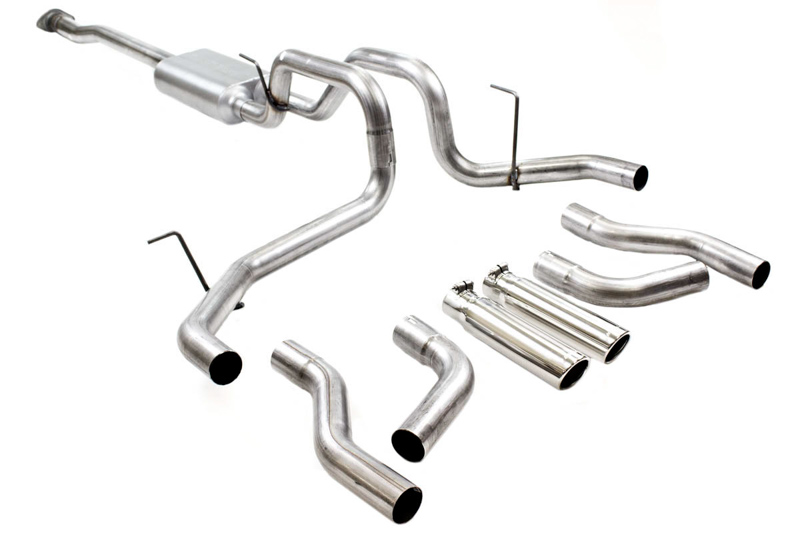 While we're pretty sure that Chris, Marty, and the guys down at Extreme Performance are probably sick of us taking up space in their shop by now, this just wouldn't be a Stage 3 install without heading out to Goodyear, Arizona, to see our friends out at Extreme. Because this kit is a dual exhaust system, install was little bit more extensive than a single exit kit. However, Flowmaster's kit comes together nicely and fits one the truck perfectly with no clearance issues. 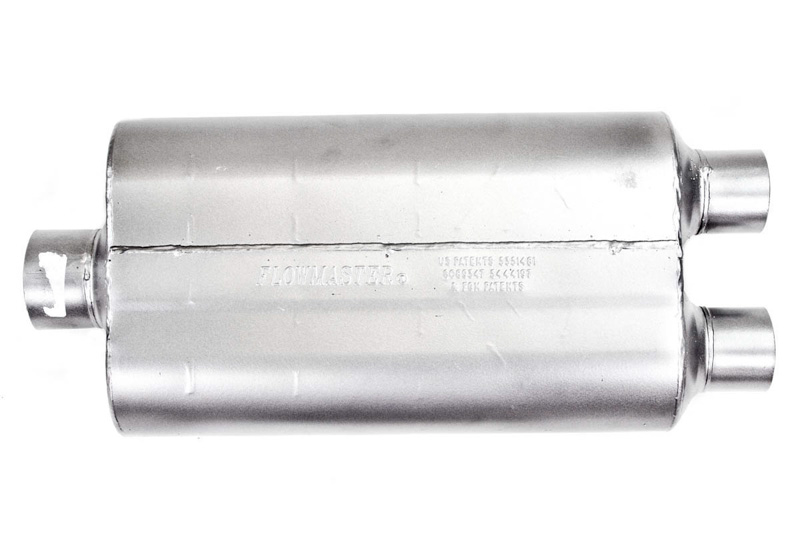 The stock cat-back kit is built to keep your truck quiet and features both a forward resonator and mid-mounted muffler. The first step of our cat-back installation was to hit all the piping connections with penetrating oil to help make Kris's life much easier.

After letting the penetrating oil do some work, Chris removed the bolts holding the resonator pipe to both the muffler's pipe and our F150's mid-pipe, before completely removing the whole assembly.

With the resonator pipe out, Chris maneuvered the muffler tube and over-axle pipe out of its hangars, over the axle, and out of our truck.

When Chris had the stock exhaust system out, it was tome to start installing the Flowmaster kit. The first step was to bolt Flowmaster's inlet pipe to our truck's mid-pipe. Because our truck has a 145" wheelbase, we didn't need to cut or use the included extension pipe.

After the inlet pipe was in place, Chris slipped the hangar clamp over the tubing and through the forward OEM exhaust mount.

With the inlet tube and clamp on, Chris fit on a clamp and then installed the Force II muffler onto the system.

Then Chris fit clamps over the muffler's outlet tubes and connected the driver's side over-axle tube into the muffler, all while fitting its hangar through the upper bed rail exhaust mount.

Chris then went ahead and grabbed the outlet tubing for the driver's side and fit it on to the over-axle piping.

Now, he had left the exhaust hangar from our Solo Mach-X Install and testing on our truck. One, because that's the system we plan on keeping. Two, we hoped that any dual exhaust kit could just reuse it. Unfortunately, the Flowmaster kit has an exhaust hangar that's oriented sideways and it couldn't just be reused. More on that later.

Leaving the driver's side for a moment, Chris hooked up the passenger side over-axle assembly that also included the rearward hangar and installed a clamp.

Chris then went back to the driver's side and removed the Solo hangar for installation of Flowmaster's own hangar and mount.

With the mount squared away, Chris slipped the driver's side hangar through it.

Then Chris finished up he passenger side by fitting it's hangar through the rear OEM mount.

Now came the choice between the dual rear exit and dual side exit configurations. We're going to do both, just to show you the differences between setups, but first up is the straight dual rear exit. For this setup, you'll need the two "S" shaped tubes included in the kit. Chris installed them in just a couple of minutes.

After the two S-tubes were in place, Chris fit on their clamps.

Once the S-pipes were clamped on and looking aligned, Chris put on Flowmaster's included exhaust tips.

With everything all put together, all that was left to do was tighten down all the clamps while double-checking tip alignment as Chris moved from clamp to clamp.

So, if you're planning on setting your truck up for a dual rear exit, your install is complete.

For a dual side exit configuration, you'll need to grab the two 90° bends that Flowmaster includes in this kit instead of the two S-tubes. Naturally, this meant we had to remove both the exhaust tips and S-tubes that we already had installed.

After the S-tubes were removed, Chris installed the two 90° bends and clamped them down.

Then all Chris had to do was reinstall the exhaust tips.

So, if you're going for the dual side exit configuration, you install is complete.

The Flowmaster kit is a very good option for anyone on the fence about exhaust configuration. Not to mention, it sounds extremely good and clean. If we could level any real criticism at it, it's that tips aren't exactly the most aggressively-sized in the world. Then again, not everyone is into massive exhaust tips in the first place. Still, this is a very good kit for the more mellow F150 driver.