Even though Diamond Eye is much better known for their huge selection of diesel exhaust systems, they do make a thing or two for the 2011 to 2014 F150s, including the 5.0L V8 trucks. The most impressive of their F150 offerings is their 4" Stainless Steel Single-Exit Kit, which was bound to have a mean sound and good power potential. Technically, this kit will fit EcoBoost F150s, 5.0L F150s, and 6.2L F150s, so of course, we thought it be nice to do an install and get sound clips of this system on our 2012 F150 5.0L FX4 Project Truck. We were a little worried about drone and rasp with a big 4" kit, but the Diamond Eye system sounded really good. It has a nice, deep tone with little to no high-pitch shriek that's common on larger systems. The kit sounded awesome and installation was an absolute breeze, even in comparison to some of our other single-exit exhaust kits. For its price, the Diamond Eye 4" kit is a nice-sounding bargain in a stainless steel package. 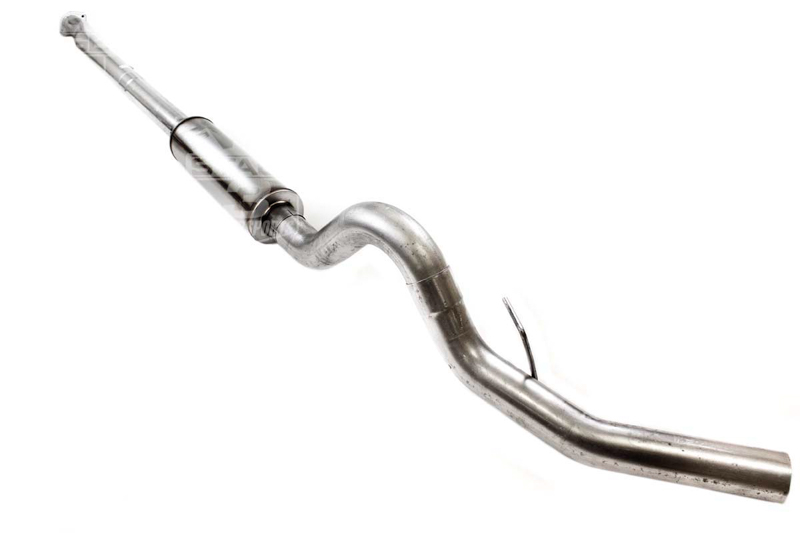 So, for the millionth time, the guys down at Extreme had to deal with us taking up space in their shop for another exhaust system install. Luckily, Chris, Marty, and all the guys over at Extreme Performance are pretty good sports, so we packed up our Diamond Eye Kit and headed down to Goodyear, Arizona. The good news about the Diamond Eye kit is that it's a single-exit system which made it incredibly easy to work with, not to mention, it only comes with three lengths of pipe and a muffler, which makes things very easy. The bad news is that it doesn't come with an exhaust tip of any sort, though the bright side of that is a lack of tip keeps the cost of the kit down by leaps and bounds. While definitely lacking flash, the kit comes with a great sound and good power potential, which is enough for most people. 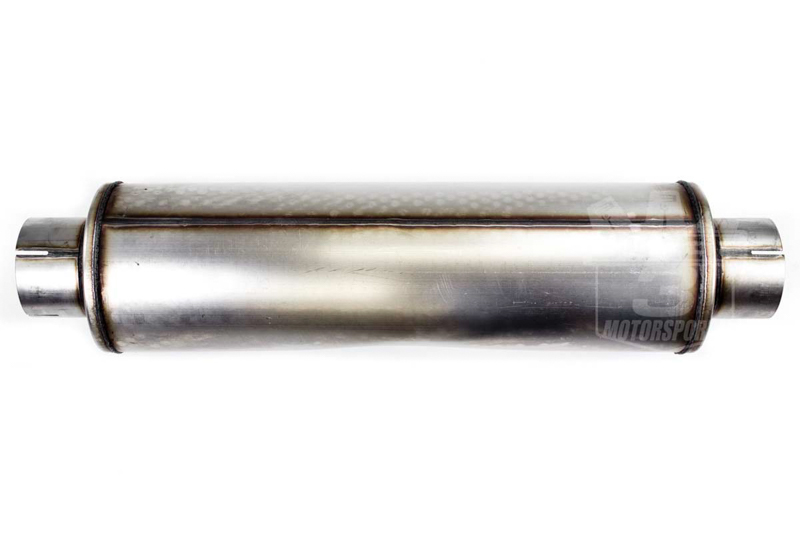 The stock cat-back kit is built to keep your truck quiet and features both a forward resonator and mid-mounted muffler. The first step of our cat-back installation was to hit all the piping connections with penetrating oil to help make Chris's life much easier.

After letting the penetrating oil do some work, Chris removed the bolts holding the resonator pipe to both the muffler's pipe and our F150's mid-pipe, before completely removing the whole assembly.

With the resonator pipe out, Chris maneuvered the muffler tube and over-axle pipe out of its hangars, over the axle, and out of our truck.

Once the entire factory cat-back system was ripped off our truck, Chris stared our Diamond Eye 4" Cat-Back install by attaching Diamond Eye's inlet pipe to our truck's stock mid-pipe.

With the mid-pipe bolted on and secured on an axle stand, Chris fit on one of Diamond Eye's hangar clamps, which is also then used to hold the muffler onto the inlet tube. Chris fit the hangar over the muffler and through the forward OEM exhaust mount before finger-tightening it down.

Next, Chris fit the second Diamond Eye hangar clamp over the muffler outlet while slipping the hangar through the upper bed rail exhaust mount.

After the hangar clamp was in place, Chris slipped the over-axle tube into the muffler outlet and tightened the clamp down with his fingers.

Now Chris fit a hangar over the final exit pipe and connected it to the over-axle pipe.

All Chris had to do to finish up our install was fit the exit pipe's welded-on hangar through the aft OEM exhaust mount and tighten down all the clamps with his wrench while double-checking the position of the tailpipe.

Like we said, a very easy installation. Probably our second-fastest instal, just behind the Magnaflow Dump Kit. It's really hard not to like Diamond Eye's kit. It had no hassles, sounds great, and is one of the least expensive 409 stainless steel systems in our inventory. Overall, it's great deal and one heck of a bargain. It's only real weaknesses are the lack of tip and that its clamps weren't the highest-quality on the planet. Still, it's hard to argue against the kit and we'd recommend it to just about anyone.

What's the measurements of the muffler it's self, for example length, diameter etc? Thank you