Before You Buy: Bulletproofing Priorities For Your 2004-2007 6.0L Powerstroke

Posted by Corey Decker on 6/6/2020 to Before you Buy
It's common knowledge that if you have a 6.0L diesel then the best idea is to get it "BulletProofed". This term was coined by a company called BulletProof Diesel located in Mesa, Arizona. Basically, a truck has been "BulletProofed" when it has at least four of these major problem areas addressed; the oil cooler, EGR cooler, head studs, fuel injection control module, and the water pump. Once those areas are addressed, the 6.0L Powerstroke turns from one of Ford's greatest failures to one of the most hardworking and dependable engines that you can own. However, sometimes our bank accounts do not allow us to raid the 6.0L Solutions section to get everything at once, unfortunately. So which of these areas should be the greatest priority to get done first? 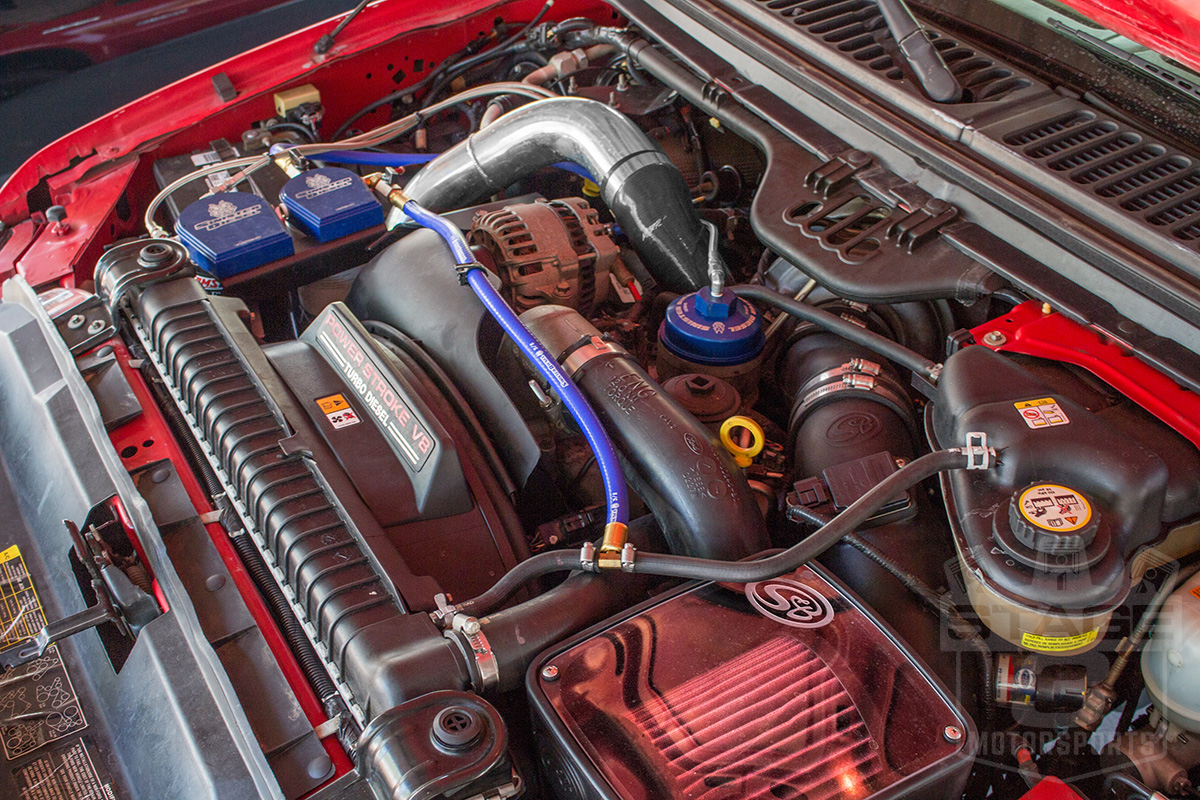 Beyond the shadow of a doubt, the very first thing to do is to replace the head bolts with studs and replace the gaskets at the same time (since you have it open). The main reason is because when Ford originally made the 6.0L Diesel, they utilized torque-to-yield head bolts. These bolts are created to stretch ever so slightly when they are tightened to spec, which in turn makes them permanently elongated. In theory, the preload that is created by the elongation of the bolts can limit the strain applied during the load which helps combat metal fatigue. Originally Ford was thinking that these would last longer than regular bolts. The issue is the engine puts out more power than the bolts they put on can handle, and the result is a bolt that stretches much further than intended. In turn, when the bolts stretch, the gaskets do not seal correctly and burn up. After the gasket burns up, the cylinder head gets damaged and your engine is practically totaled. Another key note is that the 6.0L Powerstroke has significantly less bolts than the almighty 7.3L, which means less clamping force overall. It's also important to realize that when upgrading, you want to get studs, not bolts. Studs are threaded on bolt ends and utilizes a separate nut that provides greater tension than just a regular bolt. On our 2006 6.0L F250 project truck, we decided to throw on some 2004-2007 F250 & F350 6.0L ARP Head Studs and combined those with a pair of 2006-2007 F250 & F350 Mahle 20mm Black Diamond Head Gaskets. The ARP head studs are heat-treated to 200,000psi tensile to keep your cylinder heads firmly locked down even with higher combustion pressures. Each stud is manufactured using a patented ARP 2000 material and feature broached ends to allow for hassle-free installation. Each head stud kit comes with chromoly steel nuts and ground washers in a black oxide finish for improved durability and corrosion resistance over stock. The gaskets also are designed to drop right into place of your stock head gaskets and can be used with your factory head studs or stock-sized aftermarket head studs. The Black Diamond 20mm Head Gasket uses five layers of stainless steel for its core and coated in a black adaptive fluoroelastomer coating that allows the gasket to seal tightly to uneven and pitted surfaces much better than stock which keeps cylinder gasses where they should be. So after this, what is next?

After replacing the head bolts with head studs and swapping out the gaskets, the next thing to replace in order of importance is your EGR cooler. The EGR cooler's main job is to cool exhaust gases before they are reintroduced. The most common culprit when it comes to these things failing has to do with soot building up which allows it to be come plugged meaning excessive heat can boil coolant into the exchanger. These things have also been known to fail and leak coolant into the exhaust system, creating white smoke coming out of the exhaust which is never a good sign. This is why it is good to replace the stock EGR cooler as soon as possible that way you can keep going. On our previously mentioned project truck, we went with a 2004-2007 F250 & F350 6.0L aFe EGR Cooler. This premium EGR cooler from aFe utilizes larger than OEM diameter tubes with a thicker wall to reduce clogging, extend life and resist failure. To ensure a long-lasting part, every aFe BladeRunner EGR Cooler is TIG-welded and pressure-tested at the factory. Directly after replacing the EGR cooler, it's time to look at another cooler for your 6.0L.

Directly after your EGR, it's time to take a look at completely replacing your truck's oil cooler. Whether it's poor oil quality, or residual sand not removed after casting clogging up the coolant side of the cooler that causes it, this is not a cheap fix in most cases. If you were to check and see that coolant is in your oil, or vice versa, this may be a part of the issue. The stock oil cooler is prone to failure, one thing that is recommended to alleviate this failure is to change your fluids at Ford's recomended intervals. However even good maintenance won't completely save your truck. Getting a new filter will help your engine run better by working to remove particulates from the overall engine cooling system and usually lasts longer than stock. On our project truck we went with a 2003-2007 F250 & F350 6.0L aFe Bladerunner Oil Cooler. aFe's oil cooler installs right into place of your 6.0L Powerstroke's factory oil cooler, making it a simple way to get those oil temperatures back under control for long-term reliability. aFe's oil cooler is made out of high-quality aluminum that efficiently dissipates heat and has furnace-blazed connections to ensure reliable operation. aFe includes in this kit all necessary gaskets, seals, and hardware, as well as installation instructions. It also includes all of the hardware and seals that you need in order to do the swap yourself as you can see from the video below.

One thing that's a nice touch to add in this bulletproofing process to ensure a long lasting engine is a good filtration system after you've put in the two coolers above. The stock filtration systems on 6.0Ls are notorious for having all sorts of issues. So with our build, In addition to the new pump, we also went with Sinister Diesel's Oil and Coolant Filtration System. Sinister's complete oil and coolant filter kit keeps your F250 or F350's coolant and engine oil clean which helps preserve the lifespan of your impressive Powerstroke truck and allows it to run for hundreds of thousands of miles. The kit includes a bracket with twin mounts for both filter heads, as well as high-quality billet components and braided lines that allow this awesome system to function perfectly in just about any application that you have in mind for your aggressive F250 or F350 build. This system also comes with high-quality hardware and components that were carefully designed to drop right in line with your factory oil filter and oiling system. The kit uses a new billet oil filter cap with a 1/8th NPT fitting that installs in place of your factory cap. High-quality braided stainless steel line connects to the cap fitting and runs to the included billet filter head that holds the kit's 2-micron Amsoil oil filter. The new filter head comes with a braided steel return line to route oil back into your engine. The bypass system comes with everything you need to get it up and running, including detailed instructions. After getting it BulletProofed, the 6.0L Diesel turns into an even better engine than the 7.3L in my opinion. The reason for that is because then you don't have to rely on the stock parts. You get parts that are created with better material than most stock parts which in turn creates a longer lasting engine. Everything mentioned in this article is something that we have used, tested, and trust. "BulletProofed" engine's usually have better reliability and allow for more engine modifications. For more information on what sort of modifications you can put on your truck after "BulletProofing" it, check out our Tuners and Mods section for these trucks. You will not be disappointed. Products Mentioned In This Article:
SHARE THIS POST
Previous Post
Next Post
Ooop! The email you entered isn't valid.
WooHoo! You subscribed successfully.
Ok! You're unsubscribed.
Scroll to TOP
Mini Cart 0 Items