We here at Stage 3 Motorsports definitely throw our vehicles around more than the average bear, and while we don't do that much towing, we did make the executive decision to add a 2009 to 2015 F150 aFe Machined Transmission Pan to our 2012 F150 EcoBoost FX4 Project Truck, mostly out of concern that we would wend up damaging the stock one sooner rather than later. aFe's pan is made out of cast aluminum an has machined cooling fins which lowers transmission temperatures while being much stronger than stock. Most impressively, the pan increases transmission fluid capacity by a whopping 7 quarts over stock which further improves cooling. Install was surprisingly simple, though also extraordinarily messy thanks to the lack of a drain plug on the factory transmission pan. Still, it was all pretty painless, and the end result looks and feels like a massive improvement. 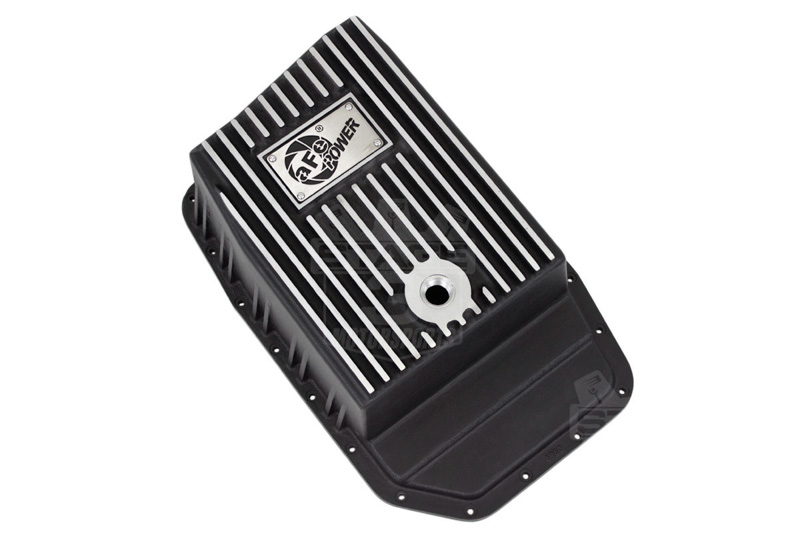 Since we had to juggle cameras and take notes, we entrusted our transmission pan install to the guys over at Dyno-Comp, specifically Tall Matt (not Beard Matt or Tat Matt. Yes, there are three Matts). Matt got our truck up on the lift, waited a bit for the transmission to cool down to just "warm" versus piping hot, and got to work.

While Matt would've definitely preferred draining the pan as the first step, since there wasn't a drain plug, Matt went right into removing all of the screws holding the stock pan to the transmission.

He started out by just loosening to bolts all the way around the pan before removing them to prevent oil spillage for the moment>,/p>

After the bolts were loose, he moved a large drain catch underneath the pan and started to actually remove all of the bolts from the drain pan.

He removed the bolts for the passenger's side of the drain pan first to try to minimize spillage onto the Y-pipe and transmission case, which was kind of in vain, though a good idea.

Matt waited until the oil spill slowed itself down before removing the rest of the bolts and taking the stock pan completely off the truck.

With the stock pan off, you can definitely see the difference in volume in the aFe pan.

With the stock pan out, Matt transferred over the stock magnet over to the aFe Pan after cleaning it off.

He then installed the 1/8" NPT fitting after coating its threads in sealant, as well.

With aFe's fittings all installed, Matt grabbed the stock transmission filter out of the factory pan and cleaned it off before installing aFe's included filter extension and O-ring.

Matt then popped the filter assembly back onto the transmission.

Next, Matt took some RTV black and spread around the edge of the aFe transmission pan.

Once he was finished with the RTV, Matt fit the factory gasket onto the aFe pan then bolted it back onto the transmission using aFe's supplied Allen bolts.

Needless to say, it took a few bottles of fluid to get that pan filled up to its proper level.

Once the fluid was in, our install was complete.

Check out our install video below for even more help.

How many quarts all together did the pan swap take?