The twin turbochargers on the 2011 to 2014 F150 EcoBoost are the big reason why those F150s make so much power, but there's still some more performance to be found by upgrading some of the core components of your F150's turbocharger system. One of those are the hot side tubes leading from the turbo compressor outlets to your F150's intercooler. The stock tubes are fairly small and have a ton of bends that restrict their flow, which is why aFe developed these 2011 to 2014 F150 Hot-Side Intercooler Tubes to give your truck an overall bump in performance. The tubes greatly improve airflow to the intercooler and reduce back pressure, adding performance especially when tuned. Given that our 2012 F150 EcoBoost FX4 Project Truck was rolling around with a ton of extra weight and 37" tires, we decided to get aFe's Hot-Side tubes installed to get all the performance we could get. 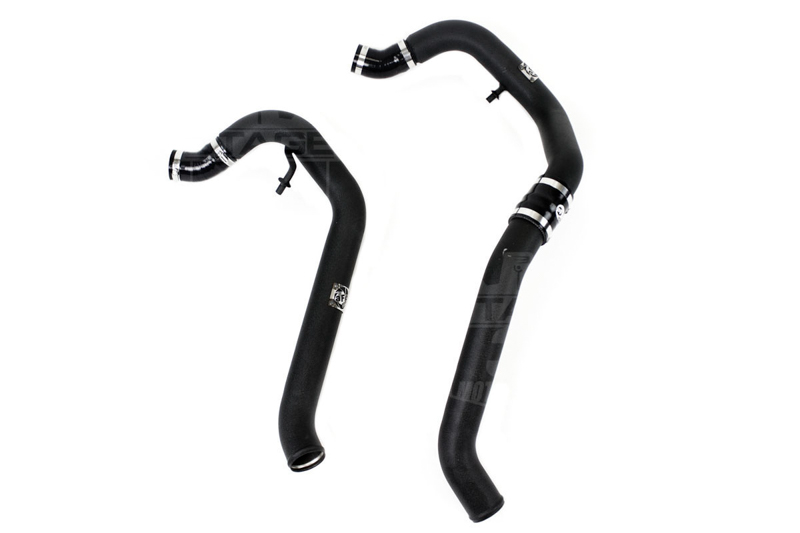 We turned to our friends over at Dyno-Comp for the installation of the tubes so that we could take all our pretty pictures and video while they handled all of the dirty work. Tall Matt was our guy on this little adventure, and we got the truck pulled in, up on the lift, and Matt got to work on our truck.

Since you need to go both under the truck and above through the engine bay, this install is much easier on a lift with the wheels off of the truck, though you may be able to manage with jack stands. Our wheels and tires stayed out of the way thanks to our lift. Matt's first step for our hot-side tube install was to remove the factory undercarriage splash guard (more commonly know as the "diaper"). The factory air dam and skid plate will need to be removed on truck's with the factory bumper.

After he draped a towel over our bumper to avoid scuffing it up, Matt climbed up onto the truck and started to remove our Banks Cold Air Intake Kit from the truck, starting by removing the couplers on the turbo inlet tubes.

Then Matt unhooked the PCV line and disconnected the MAP sensor on the intake before removing the intake system from the truck.

While not absolutely necessary, Matt also removed the stock charge pipe to get some extra wiggle-room when it came to getting the factory hot-side tubes out of the truck. He started by removing the MAP sensor and the vacuum line.

Reaching the clamp for the passenger's side hot-side tube isn't exactly the easiest thing in the world to reach, much less see, but Matt was able to get at the clamp with some extensions and a swivel socket.

Once Matt was able to loosen the clamp, the stock hit-side pipe dropped off the turbo relatively easily.

Matt then removed the clamp holding the hot-side pipe and its coupler to the intercooler and was able to fairly easily remove the tube from the truck.

Here's a comparison of the stock tube next to its replacement in the aFe kit.

Then it was time for the driver's side hot-side tube. Luckily, the worm gear clamp holding it to the turbo outlet was much easier to reach than the other side, and Matt only needed a few extensions to loosen it up and remove it from the truck.

Matt then removed tube itself off of the turbocharger outlet and then the line going into the driver's side hot-side tube.

Next, Matt removed the the clamp for the driver's side tube from the intercooler and pulled the pipe out of the truck.

Here's a comparison between the driver's side tube from aFe versus stock, along with the passenger side tubes.

Matt chose to install the driver's side aFe hot-side tube first, and he laid it down in the bay to figure out its routing.

Once he got the pipe aligned correctly, Matt got off the lift and went into the wheel well to slip the new aFe hot-side tube's coupler and clamp onto the turbocharger outlet.

Matt then fit the hot-side tube's other end onto the intercooler inlet port and tightened down the clamp.

Next, Matt grabbed the driver's side tube and dropped it into position near the turbo outlet and intercooler inlet.

Once he was certain about the alignment, Matt fit the hot-side tube's coupler over the intercooler inlet and tightened down its clamp.

Then Matt fit the tube's coupler over the turbocharger outlet and tightened it down.

With the tubes installed, Matt reattched the vacuum lines to both the hot-side tubes and the charge pipe before reattaching the charge pipe to throttle body and reconnecting its MAP sensor.

Once the intake was back in the truck and operational, our aFe Hot-Side Tube Install was complete.

Check out our install video below while you're here: