Before You Buy: When does my F150 need UCAs?

Posted by Jason Locke on 7/28/2019 to Before you Buy
One of the more common questions we get about aftermarket F150 upper control arms is "when should I add them to my truck?" or "at what leveling height do I actually need UCAs?" As per usual, if I'm putting a blog post together about the issue, it's not a simple answer. Despite how innocent and straightforward the line of questioning appears, the answer really comes to down how much leveling you have, how hard you're going to push your F150 off-road, and the condition of your factory UCAs. In general, a set of aftermarket UCAs is never a bad idea, but whether they're worth the price tag is going to depend on a couple of factors.

What are UCAs?
Before we get into the hows and the whys, we'll need a bit of the "whats" in a refresher course for the uninitiated. The 2004-2019 F150s use a double-wishbone front independent suspension where both an upper control arm and lower control arm connect to a large steering knuckle to locate the wheel. The factory upper control arm features a low-cost stamped steel construction and a similarly low-cost ball joint for connecting to the knuckle's upper spindle. In general, there's nothing inherently wrong with the stock upper control arms on the F150. On a truck at stock ride height or with a full 4" or 6" suspension lift that keeps the stock angles that's used primarily on the street, the stock UCAs are fine. They do their job as they were intended at a perfectly reasonably price point. 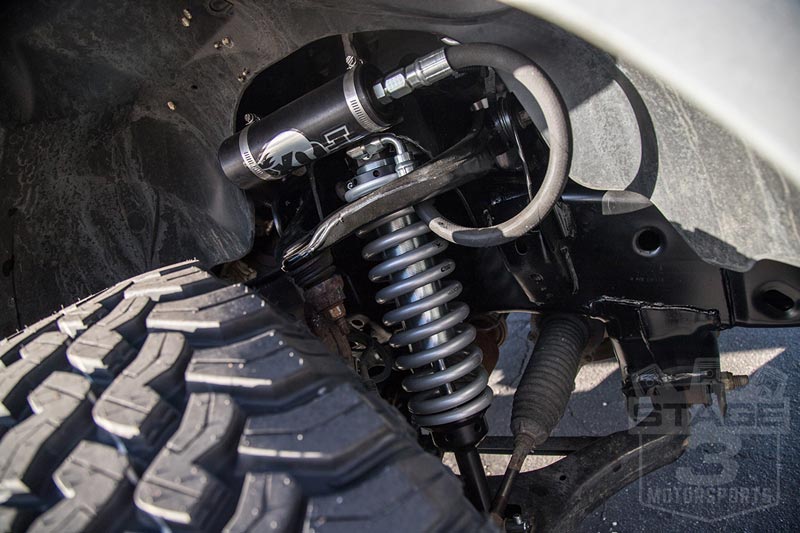 Aftermarket upper control arms operate on the same principles as the stock upper control arms, but are stronger than stock and feature slightly revised designs that allow them to clear the coilover spring when your truck is either leveled or fully articulating off-road. Aftermarket UCAs also use either uniball joints or high-angle ball joints that allow you to squeeze out a wee bit more wheel travel than stock (at least before you're limited by the CV and tie rod almost immediately after). There's a few variations in design when it comes to aftermarket UCAs, but they all generally function the same way. Check out our Upper Control Arm Breakdown Video on our YouTube Channel, if you want to get into the nitty-gritty of UCA types and applications. 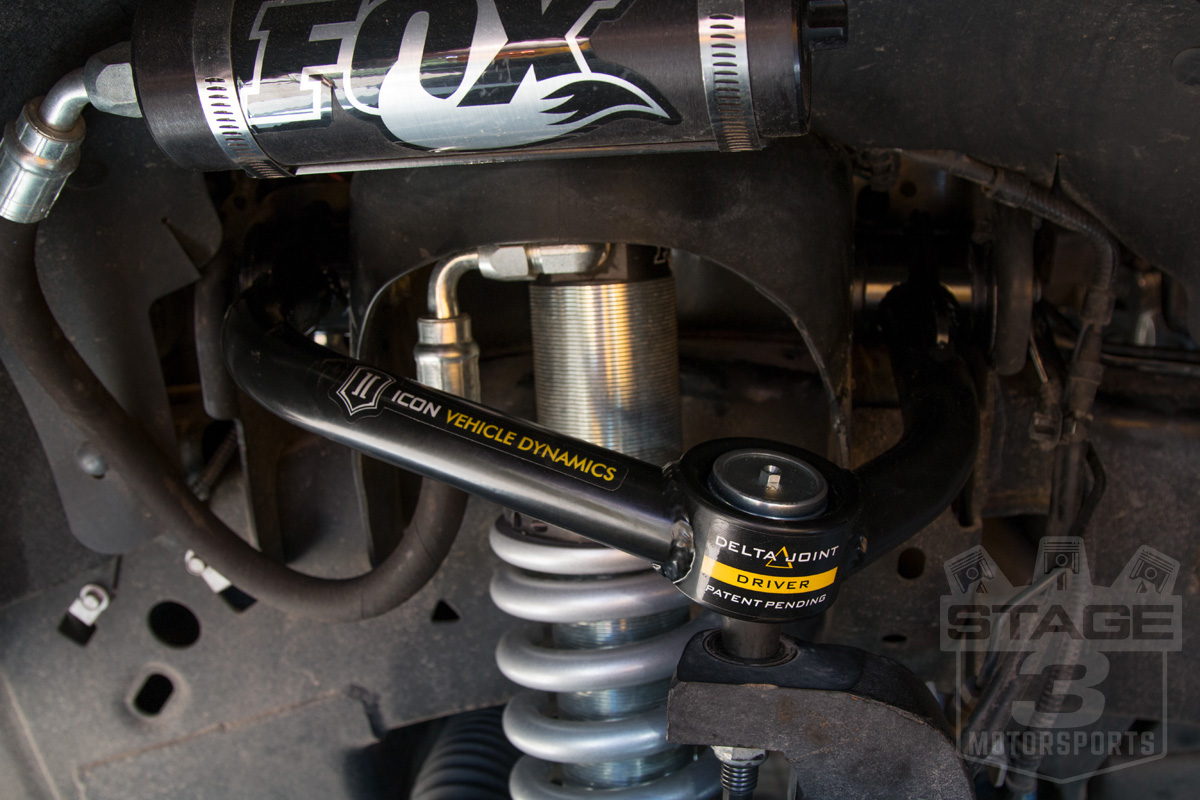 The Leveling and Geometry Consideration
The first reason you may want to consider installing UCAs is due to adding a leveling kit to your F150. Any leveling kit for the 2004-2019 F150s (be it basic strut spacers, new struts, coilovers, etc.) throws off your suspension geometry to at least some extent. This becomes an issue in regards to the factory UCAs for two reasons: spring contact and ball joint stress (we'll get back to this). 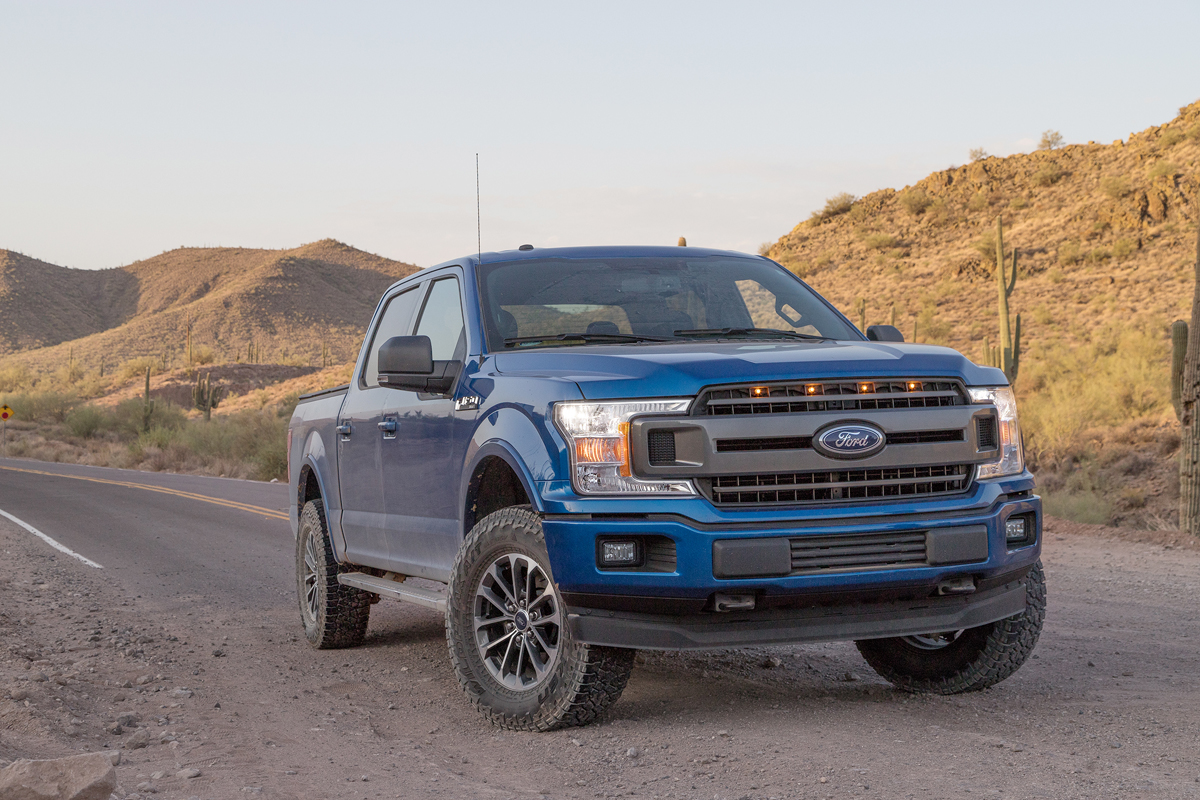 Spring contact occurs due to your leveling kit of choice causing the angles of your UCAs (and the rest of the front suspension) toe be thrown off. The sharper angle of the UCAs, combined with the fact that the rest of the suspension travels more than the UCAs can cause the inner part of the UCA's arms to come into contact with the spring of your front coilover assembly during travel. It can happen as at little of 2" of leveling, but doesn't really start becoming a huge issue until 2.5" of leveling. Spring contact beats up both the UCA and the spring, and is without a doubt, not a good thing. 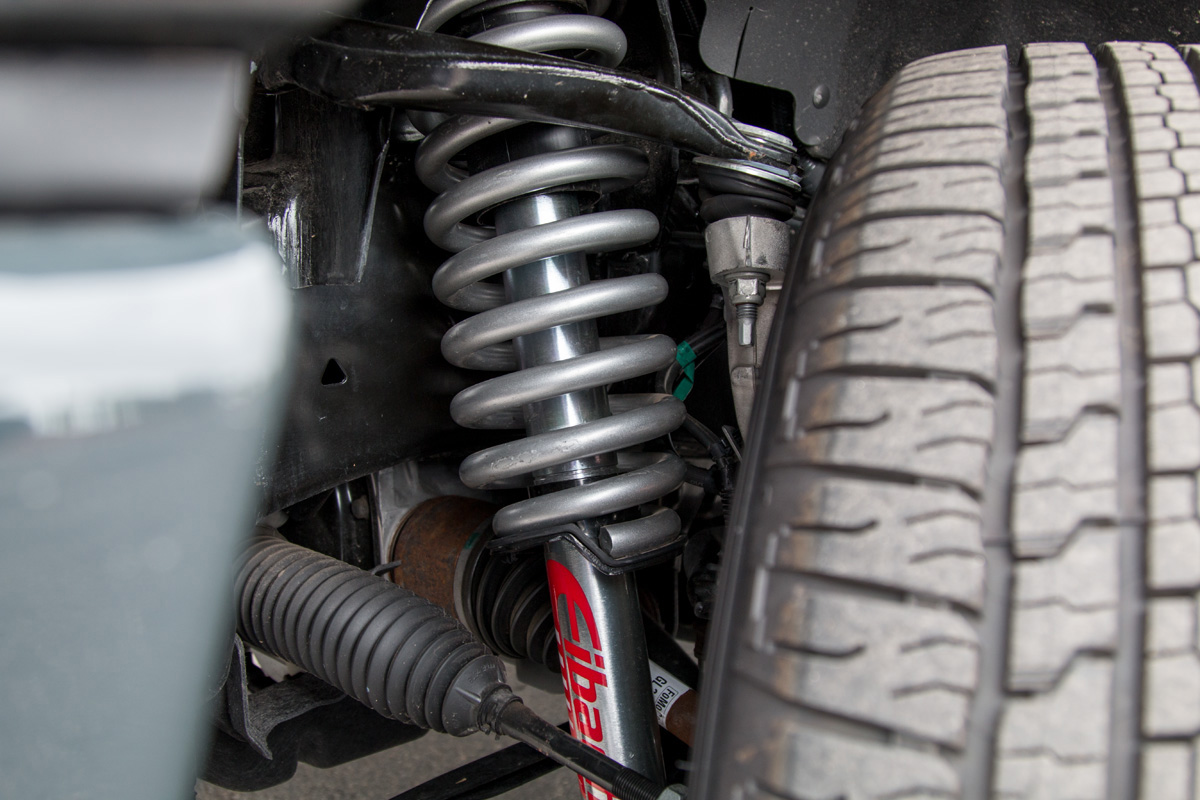 Granted, if you're not fully articulating your suspension, you aren't going to get spring contact, so an aftermarket UCA may not even be necessary. So even with geometry issues, there's not a red line. If you're at 2.5" leveling or higher, then it's a good idea to at least consider an aftermarket UCA, but leveling height alone doesn't mean you absolutely, 100% need aftermarket upper control arms. 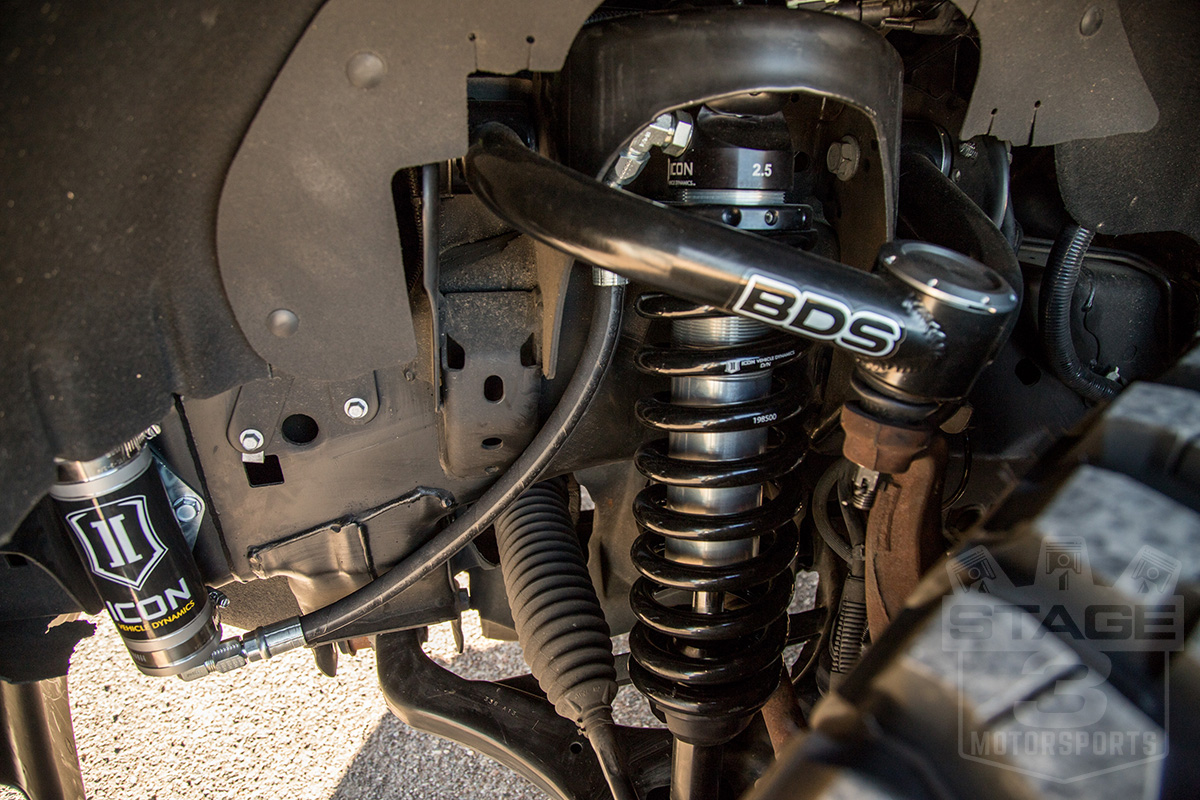 The Application Consideration
So if geometry isn't the single determining factor in whether or not you should grab a set of aftermarket UCAs, then maybe how you're using your truck is. While there's definitely a more compelling argument, there's still a lot of nuance when it comes to finding that magical red line where a UCA is absolutely necessary. The determining factor of whether your application warrants UCAs is going to be how much stress you're putting on the UCAs. Since the stock UCAs are just stamped steel with a pretty basic ball joint holding them to the knuckle, either regular or extremely violent off-road use will see something fail eventually. The most common point of failure on the factory UCAs is their ball joint. The ball joint gets put under a lot of strain during articulation, and the stress from the suspension loading and unloading on the ball joint gets exacerbated by geometry issues from leveling (I told you we'd come back to it). Geometry issues from leveling cause more load to be on the ball joint than there otherwise would be at stock ride height. Combined that extra strain with some pretty aggressive off-roading, and it's not impossible to actually pull apart the stock ball joint and really ruin your day. It's also not entirely impossible to crack the arms themselves or break the frame mounts, but I haven't heard of it happening on standard F150s. Does this mean that because your F150 sees dirt that you should instantly grab a UCA? Hell no. If you take your truck camping two or three times a year on well-maintained forest roads, UCAs are probably still not a required upgrade for you. Heck, even our 2014 F150 Hunting Truck Build kept the stock UCAs. Our rationale was that the Fox 2.5 coilovers we installed were only set at about 1.5" of height of the box, the stock UCAs were in pretty good shape, and we were only going to really flog it off-road once or twice before selling it off. So we did some mental math, and made an executive decision to just stick with the stock UCAs. Now, that truck is an outlier, and nearly all of our other builds have had a UCA, but we are not nice to most of our trucks and use them off-road both regularly and aggressively. In the end, there's a not really a red line. Your final decision of whether or not to upgrade your F150's UCAs is dependent on both your leveled height, application, budget, and how you're honestly going to be using your F150 during the time you own it. We've said it before, but there is no "best". Everything's on a scale, and you know how you use your truck and what your plans are better than we do. If you are going to be leveling your truck and running around off-road, then a UCA is definitely a good idea, and we highly recommend one, but that doesn't mean one is an absolute necessity.
SHARE THIS POST
Previous Post
Next Post
Ooop! The email you entered isn't valid.
WooHoo! You subscribed successfully.
Ok! You're unsubscribed.
Scroll to TOP
Mini Cart 0 Items