Before you Buy: What Leveling Kit you Need to Make Your F150 Truly "Level"

Posted by Jason Locke on 7/3/2021 to Before you Buy
There's more than a few leveling kits out there for the 2009-2014 F150s and 2015-2020 F150s, though the term "leveling kit" is used for any kit that adds at least some front ride height, and with a variety of 1.5", 2", 2.5", and even taller leveling kits and coilovers out there, it's tough to figure out just what ride height you need to get your F150 to a "truly" leveled stance. We here at Stage 3 get the question often, so we thought we should do a deep dive and look at different leveling heights, how to get your F150 to a "dead-level" stance, and why it may be a good idea to actually keep some rake on your F150. We've tried a TON of different leveling kits over the years of varying heights on our very own F150 project trucks, and we'll take you through the difference stances and some of the pros and cons of different leveling heights for your F150.

We'll start with the smallest leveling kits in our arsenal, which are 1.5" F150 Leveling Kits. These kits keep a good amount of your F150's front rake, and are less designed for "true" leveling, and more to give your F150 a bit of extra clearance to squeeze on bigger tires. Auto Spring's 1.5" leveling kits, FactionFab's 1.5" kit, as well as leveled strut kits like the Bilstein 5100s or Eibach Pro-Trucks have settings for 1.5" of lift or close to it. 1.5" leveling kits are a great choice for anyone who wants to maintain some rake for towing and hauling applications so that the truck doesn't end up nose-high when loaded down with a bunch of tongue weight or payload. 1.5" kits also don't tend to throw off your suspension geometry as much as taller kits, which means you'll have less issues with alignment, tire wear, and spring contact on your F150's UCAs. The downside to 1.5" leveling kits is that 1.5" isn't exactly a ton of front lift, which will limit maximum tire size. Also, if your goal is to get your truck to a "dead-level" stance, then these kits aren't for you.

The next step up from 1.5" leveling kits are 2" leveling kits. As you've probably already guessed, 2" leveling kits provide 2" of front leveling and further decrease rake over 1.5" leveling kits. 2" leveling kits are the most popular F150 leveling kit size, and strike a good balance between ride height, tire clearance, rake reduction, and geometry issues. Auto Spring's 2" Kits, FactionFab's 2" Kits, and many coilover kits like the F150 Fox 2.0s provide 2" of leveling. 2" leveling kits still leave a hint of rake, but that's not necessarily a bad thing. The little smidge of front rake can help you when towing or hauling fairly light loads (like camping gear) so that you can stay level without adding any rear lift or rear load support parts. The extra ride height over 1.5" lifts also give you more wheel and tire options, so that you can add a good amount of ground clearance without having to worry about cutting or trimming. That all being said, there are a couple of downsides with 2" leveling kits. At 2" of leveling, you can start to run into geometry issues, namely spring and UCA contact at full droop, and even at 2" of leveling, you'll still have a bit of rake. Again, if you're looking for a "dead-level" stance, 2" of leveling isn't your best bet. 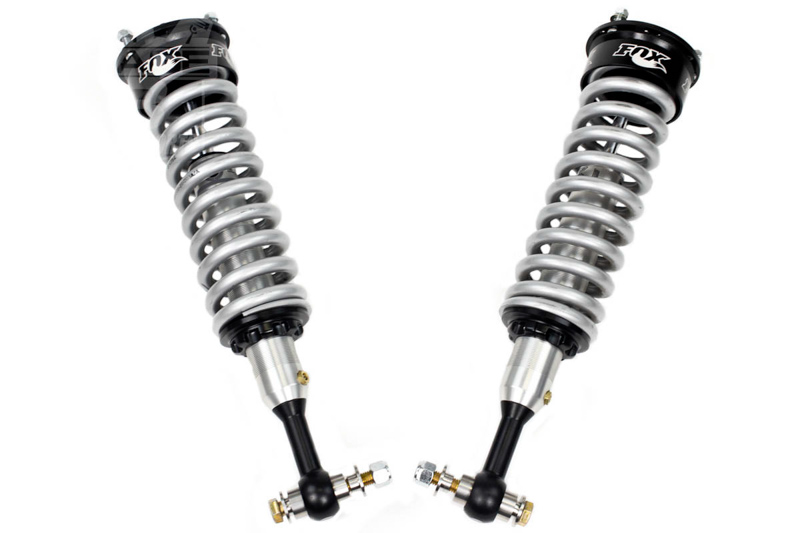 Jumping up from 2" leveling kits are 2.5" leveling kits, and here, at last, we can get the 2009-2020 F150s to a near-perfect level stance. 2.5" Leveling kits from Auto Spring, Pro Comp, and coilovers like the ICON 2.5 Remote Reservoir Kits all add up to 2.5" of front ride height to your F150. At 2.5" of leveling, you can squeeze on a big tire and get a near rakeless stance for your F150. Now, being "dead-level" is all well and good, but there are a few drawbacks to 2.5" leveling kits. The biggest is that the suspension geometry issues that just barely started rearing their heads with 2" kits, now become a more pressing issue. It's not uncommon for your spring and UCA to make contact at droop, and if you're going to be using your F150 off-road on the regular, you should probably consider grabbing a set of aftermarket UCAs. Secondly, having no rake isn't all that it's cracked up to be. With a dead-level stance, as soon as you add any weight to the bed, you end up with rear squat and a nose-high stance which can lead to weird handling issues and stability problems when towing or hauling. If you're planning on towing with a 2.5" leveling kit, you should probably grab some sort of load support upgrade like helper springs or air springs.

Once you go past 2.5" of leveling, you start getting a nose-high stance. Now, this isn't necessarily a bad thing, as the F150s can handle about 3" of leveling (though we do recommend using an aftermarket UCA beyond 2.5" of front leveling) without too many issues. Granted, you get largely the same benefits as 2.5" kits, and coilover kits like Eibach's 2.0s, certain Elka 2.0s, and certain Elka 2.5s are all capable of going beyond 2.5" of front lift, though you get even better tire clearance. That being said, going higher that 2.5" of leveling also has all of the 2.5" leveling problems plus some. Since 2.5" of leveling gets you dead-level (more or less), higher than that means you get rear squat without the bed or tongue being weighted down at all. While not everyone's cup of tea, this "Cali Stance" may be up your alley, but most folks will probably want to add some sort of rear lift to compensate. Also, the issues with suspension geometry are further exacerbated, making spring contact with your stock UCA extremely likely. You may also want to double-check your F150's CVs and tie rods when you go that high, because while the OEM CV axles and tie rods are actually pretty stout, if they have a lot of miles on them or their boots are worn, you could run into issues. The TL:DR; of all this is that a 2.5" leveling kit or front lift is how you get an F150 perfectly level. Now, there are drawbacks to being perfectly leveled that we've already mentioned, so you may want to consider going with a slightly shorter leveling kit, or adding an aftermarket rear block, add-a-leaf, leaf springs, or other form of rear ride height to compensate. If you're towing or hauling at 2.5" of leveling, you should definitely consider grabbing a set of helper springs or air springs. Also keep in mind that most leveling kits are rated "up to" a certain size. The reason being is that on an IFS suspension, ride height is also dtermined by the rest of the suspension geometry. Thus, the condition of your front suspension components and quirks in alignment and initial manufacture mean you may not hit the exact ride height you're looking for, but you should at least be close.
Previous Post
Next Post
Ooop! The email you entered isn't valid.
WooHoo! You subscribed successfully.
Ok! You're unsubscribed.
Scroll to TOP